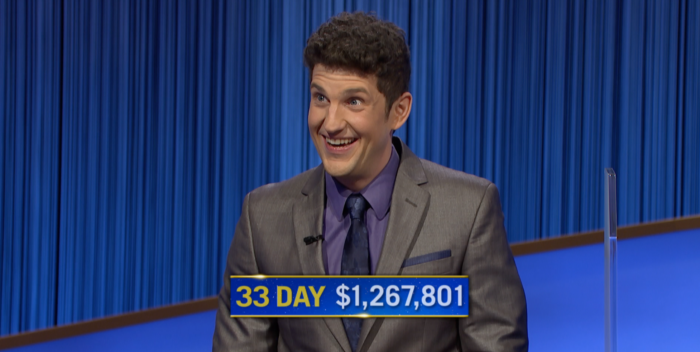 It hasn’t been a great year for “Jeopardy!” At one point the veteran game show was down to 4.5 million viewers this year. That was off a high of 6.1 million last winter when they returned after Alex Trebek’s death.

Well, the most recent rating week which ended Friday October 8th was a smash hit. The show rose 7% to 5.9 million viewers, a huge comeback.

Alas, the sudden rise had nothing to do with who was hosting, although Mayim Bialik’s hosting run has had improved ratings. But the reason was something different.

The cause of the jump was the last week of Matt Amodio’s run as champion. Fans tuned in to see if Amodio would make it another Friday as top player, which he did. Unfortunately, on Monday the 11th, Amodio’s run came to an end when he was defeated. He exited the show with over a million bucks.

Now “Jeopardy!” goes back to reality. And coming November 5th Ken Jennings takes over as host again. He was last seen in January.