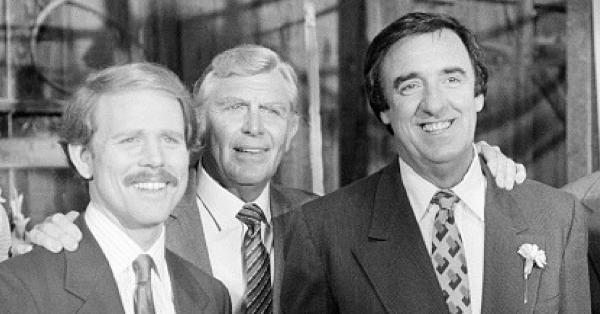 Mayberry was a small town, Ron Howard writes in his bestselling memoir, “The Boys,” with brother Clint. “But for those of us who actually spent our days there, it contained the whole of human experience.”

I am absolutely riveted by this book which I downloaded from Kindle (how else do we get copies of these things?).

(There are so many stories in this book, it’s impossible to put down. There’s also a lack of stories in some cases. Ron Howard made “Splash” and “Apollo 13” with Tom Hanks, for instance, and there’s not a mention of him in the 400 plus pages.)

A couple of things jumped out at me. Each is from “The Andy Griffith Show,” on which a young Ronny Howard played Opie for all of his childhood. Howard recalls being close with actor Howard Lindsay, who played Goober. They played ball a lot, both baseball and basketball. They shot hoops so much that Ron became proficient. (I seem to remember Richie Cunningham on the high school team on “Happy Days.’)

Howard’s memories of Jim Nabors, who played Gomer Pyle, are disarmingly sad. He writes: “I wasn’t as close with Jim Nabors, though he was an extremely nice man. It took me until the ’80s, when we did the Return to Mayberry reunion film, for me to discover that Jim was not just this friendly “Gollee!” goofball but a worldly, intelligent guy with whom I would enjoy having conversations.” Later he discovered the crew called Nabors names behind his back.

“I didn’t yet understand that there were gay people all around me, and all across the world. But this was my introduction to the very concept of queerness.”

Star Andy Griffith, meantime, had a failing marriage on his hands. He finally divorced his wife, Barbara, in 1972 and married two more times (plus had a hot affair with his co-star Aneta Corsault).

One day, “Griffith declared, within earshot of the whole cast, ‘My psychiatrist told me that probably the reason I work so damned hard on this show is that I don’t want to go home to my wife. And you know what, Don? I think he’s right.’ Andy wasn’t saying these things to get laughs. As his marriage to Barbara was unraveling, I saw him endure genuine pain. He came back from Christmas break one season with his hand all taped up. He was blunt about what happened: “I got drunk, I got mad, and I put my fist through a door.”

Brilliant book, so glad I downloaded it. Maybe the publisher will send over a hardcover. Don’t miss it!