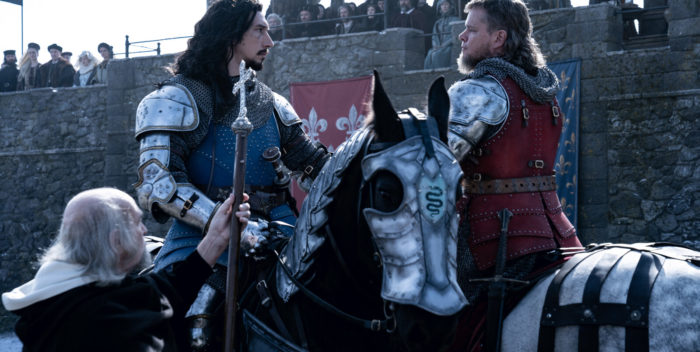 Ridley Scott’s “The Last Duel” would be the Last Movie for any other director.

This thing is playing in over 3,000 theaters. But no one is going. Per theater average was just $1,573 with multiple showings.

This is really a disaster since this extravaganza cost upwards of $150 mil. Those three stars alone will have salaries that make turning a domestic profit impossible. This was a 21st Century aka 20th Century Fox release.

Exhibitor Relations notes: “Affleck and Damon stunk it up overseas too, as THE LAST DUEL grossed just $4.2M in 37 territories including France, UK, Italy, Mexico, Germany, Japan, Brazil–with NOT ONE market totaling over $1M, and only two above $500k.”

Lucky for Ridley he has “House of Gucci” coming soon with Lady Gaga and the ubiquitous Adam Driver.

“The Last Duel” got respectful reviews, too, with an 86 on Rotten Tomatoes. But just, you know, no one cared. One day soon we’ll see it on Disney Plus and judge for ourselves.

This will be a $150 million-plus write off for Disney and the producers.