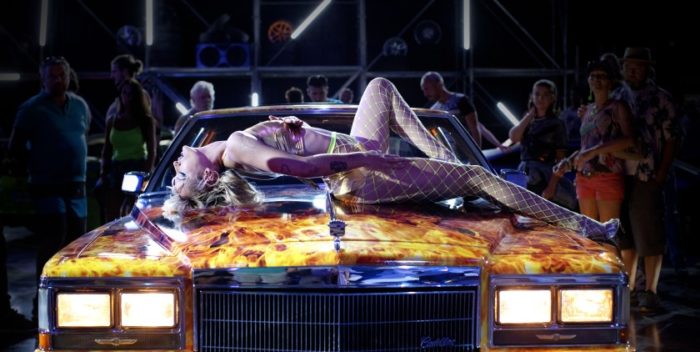 France has chosen their official entry for the 2022 Oscars and it’s “Titane” directed by Julia Ducournau. This is a bizarre, unpleasant, jarring, pretentious film but it did win the Cannes Film Festival.

So far no one has gone to see “Titane” at the US Box office.

Here’s what happens: a girl gets metal plate put in her head after being in a car crash with her father. As a teen she’s a miserable sort of punk, lots of tattoos, etc. She has sex with a Cadillac– yes, a Cadillac– and becomes pregnant. She leaves home, and disguises herself as the long lost son of a fireman who wants to believe she is his missing son. She gives birth to a metallic creature.

I had an actual nightmare after watching “Titane.” It was not fun. We’ll see how this develops. The best film in a foreign language for 2022 anyway is Pedro Almodovar’s “Parallel Mothers.” And Paolo Sorrentino’s “Hand of God” is also a big contender. So maybe the French film people understood that and said, Who cares?

So far no word from Cadillac, which will no doubt deny paternity.