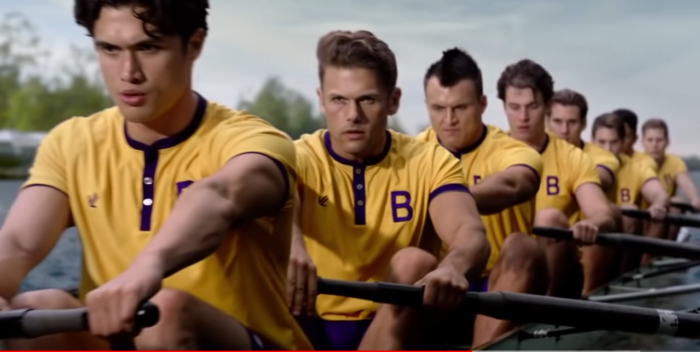 You remember the Winkelvoss twins: they claimed also to be founders of Facebook and sued Mark Zuckerberg back in the day. Their settlement with him was a measly $65 million. They were played by Armie Hammer in “The Social Network.” They started the website Guest of a Guest and a couple of financial companies. They are reported to be crypto currency billionaires.

The Winkelvi, as they are known, are also rowers. They are big, big fellas, and took up rowing as teens. They rowed at Harvard, started and bought teams, and even participated in the Olympics (they took sixth place in the men’s pairs rowing event at the 2008 Beijing Olympics).

Now it turns out they have paid for — i.e. “executive produced” — a movie about rowing called “Heart of Champions.” This is not grammatically correct. You could have Hearts of Champions, all plural. or Heart of a (singular) Champion. But many hearts of one champion suggest science fiction.

They hired a very good director, Michael Mailer, who got a real movie actor, Michael Shannon, to play the coach of their fictional rowing team. There’s a trailer that’s just appeared and looks good. The cinematography seems like it was top notch. The screenplay does not:  Shannon’s dialogue in it is so cliched that the very low level Vertical Entertainment is releasing the film on October 29th. It will go straight to video. And airplanes.

So far there is no listing for “Heart of a Champion” on the imdb. Most people will never know about it, but now the Winklevi can call themselves movie producers.

There’s nothing wrong with vanity movies, by the way. I always remember the one Greg Kinnear was in about the invention of timed windshield wipers. I just got new wipers at Valvoline and thought about that movie. So you see, films do make a difference even if no one wants them!

PS I learned about Mailer’s involvement in this thanks to Richard Johnson’s new Sunday column in the New York Daily News. I wish the News would highlight that column instead of hiding it!