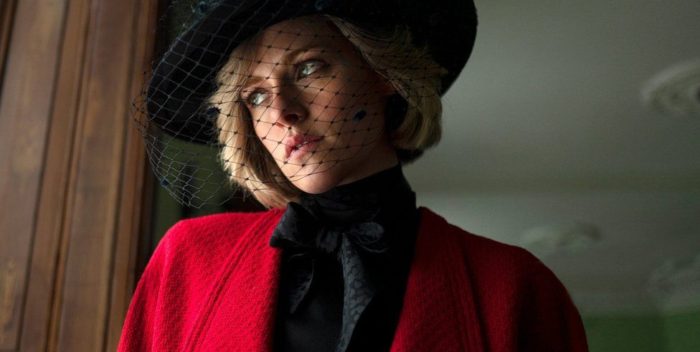 There’s been a lot of festival talk about Kristen Stewart playing Princess Diana in “Spencer.” The push is on for an Oscar nomination, which she’ll probably get thanks to a small field and aggressive campaigning. But it’s a performance lost in a horror, and horrible film.

Pablo Lorrain also made “Jackie” with Natalie Portman’s pill box hat recreation of the Kennedy widow. These are similar movies, fables that have little to do with any reality and minimize the protagonist’s actual life into some perverse version of itself.

“Spencer,” which played at the Hamptons Film Festival last night, is as unenjoyable a movie as you can imagine. If you want something hewing closer to historically accurate and brightly made, stick to “The Crown.” “Spencer” is a horror film, something along the lines of “Whatever Happened to Baby Jane?” It runs the gamut from insane to inane.

The only redeeming feature is Stewart herself. It’s a very astute performance that shows her range. She is absorbed into Princess Diana fully, the accent, the posture, little movements, something flickering behind the eyes. Stewart’s Diana is looking around desperately for a movie she can part of.

But this “fable” or whatever it’s supposed to be is highly ludicrous. It’s Diana at Christmas trapped at Sandringham with the Windsors. The children are her only friends aside from a dresser, played by Sally Hawkins, who declares herself to be in love with the princess. There’s also a major who runs the house played by Timothy Spall as if he’s been embalmed and placed back in service.

Otherwise this could be Diana in “Get Out.” She has no relationships and is depicted as going mad. having hallucinations of Anne Boleyn, the beheaded wife of Henry the Eighth. (His portrait looms over the household.) Camilla Parker Bowles, of course, is hanging around. Diana is obsessed with a string of pearls the size of malted milk balls that Charles has given each to his wife and mistress. She’s also bent over a toilet, regurgitating, and cutting herself with wire clippers causing a bloody gash in her arm.

But this is all just a sadistic caricature of the real Diana, currently being tortured on Netflix, as well, in the looming Broadway disaster. If all these content creators were actually sympathetic to Diana we might have gotten different results. But this movie and the Broadway show only to serve to make her seem crazy and stupid, two things I don’t think she was. They get nothing of her wily instinct to survive and thrive outside the royals.

“Spencer” really has the earmarks of a festival film that’s taken critics hostage in isolated environments. When it hits the open air of a real audience, as it did last night, it will die more violently than poor Diana. Kristen Stewart may have her Oscar nomination, but that’s as far as she’ll get I think.