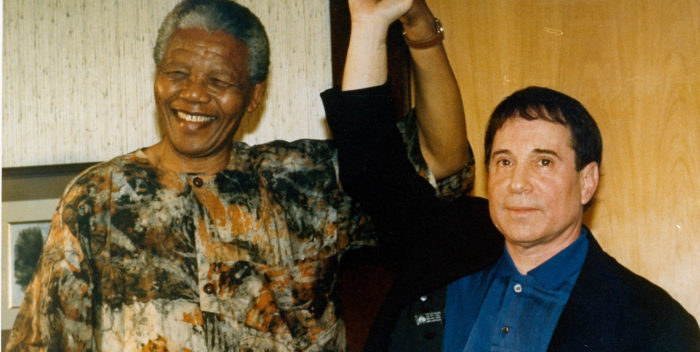 Before 1987, few people in America knew who Nelson Mandela was or was in support of him. The South African leader had been in prison since 1962, so for 25 years he was not well known outside of certain circles.

Little Steven van Zandt was among those who did know about Mandela. The E Street Band leader first became involved with anti-apartheid movement through his boycott of the Sun City resort, a major strike at the evil of apartheid.

In his very detailed new memoir, “Unrequited Infatuations,”  the politically passionate van Zandt recalls that in helping to organize the famous June 1988 Freedom Concert for Mandela at London’s Wembley Stadium, he ran into issues with some of the performers. The concert was billed as a 70th birthday show so as not to scare TV networks and advertisers. But van Zandt recalls it was really an all star show seeking Mandela’s freedom from prison.

Not everyone was in agreement. van Zandt writes:

I was surprised an American network picked up on it at all. The consensus among the mainstream media was that Mandela was a terrorist
and a Communist. And not just among the right wing. Famous liberal
Paul Simon once cornered me at a party and asked how I could be supporting this Mandela character when he was obviously a Communist.
“Really, Paulie?” I said. “You sure?”
“Yes,” he said. “My friend Henry Kissinger explained it all to me. Just
follow the money!”
“Well, Paul, I know you and Henry are students of revolution, but I
have news for the both of you. People fighting for freedom outnumbered
by a better-supplied enemy don’t really care where the money comes
from. And by the way, your buddy Kissinger is not only an unindicted war
criminal but was with the Dulles brothers in the early fifties overthrowing
Mosaddegh in Iran and installing the shah. That’s the direct cause of half
of the real terrorism on the planet to this day. So when you see him, please
tell your friend Henry to stick his Nobel Peace Prize up his fuckin’ ass.

Simon, of course, quickly came around.  van Zandt writes he was amused two years later when Mandela came to New York to raise money for his run for President of South Africa. Simon was so much on board that a photo of him and Mandela appeared in all the newspapers. He writes: “I guess Paul Simon got over that whole scary dangerous Communist thing.”

Another big issue was the appearance of Whitney Houston. Some performers didn’t want her on the show, van Zandt recalls, but she was needed to broaden Mandela’s appeal.

I happened to be in the office with the promoter, Jim Kerr, and Peter Gabriel
when Whitney Houston’s Manager came in. “We thought this was about
celebrating a birthday, but we’re hearing lots of politics from the stage.
We don’t want any part of it. We want the Free Nelson Mandela posters
covered up or Whitney doesn’t go on!” He stormed out.
Whoa!
We looked at each other in shock. I spoke first. “Throw that bitch the
fuck off this show right now!”
“We can’t,” the promoter said. “We sold the show to the networks
with her on it.”
“Let ’em complain!” I said.
Jim, or maybe Peter, spoke up. “She was the only request from
Mandela personally. They had a poster of her in prison and all the prisoners . . . fell in love with her.”
We let her perform. It makes me nauseous seeing the documentaries
since then proclaiming her as a proud activist who fought against apartheid all her life.

Houston, of course, also came around despite the manager’s interference.

van Zandt recalls: The American network edited out everything I said onstage and
trimmed whatever politics they could in general. Fox, of course. But the
telecast was enormously successful and helped cement Mandela’s status
as a world leader and one of the good guys.