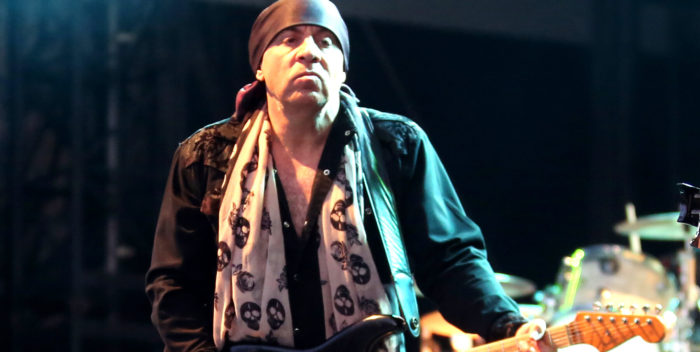 Tuesday is the official publication date of “Unrequited Infatuations,” the really great memoir from Steven van Zandt aka Little Steven, Miami Steve, Stevie, leader of the E Street Band among many other things. I’ve been a fan of Little Steven since he emerged as Bruce Springsteen’s musical director, all star guitarist, songwriter and producer of Southside Johnny and the Asbury Jukes since the mid 70s. He’s also been a very astute political activist.

I always wanted to ask Stevie about his trademark bandanas. They’ve given him such a distinctive look, a brand that most marketing people would pay millions for. Later in the book he says he fell on bandanas because kids with cancer who lost their hair would wear them and it would make them feel “super cool.”

But here’s the backstory of Little Steven and the Bandanas:

I’m not sure exactly why, but I suppose I am obligated to explain
the origin of my unusual habiliments. On top of the obvious standard
hippie/gypsy/troubadour garb, there was an incident that married the
bizarre to the bazaar.
One night I was driving a girlfriend home from the Pony, three in
the morning, four lanes, when a guy coming the other way crossed
over. I switched lanes as quickly as I could, but he drifted right with me.
Head-on collision. Not too fast, but I smashed into the windshield, and
though I didn’t lose consciousness, I needed a few operations. After
that, my hair never really grew in properly.
I asked Bruce what he thought. “You’ve been wearing these ban-
danas,” he said. “Just make it a thing.” I did.