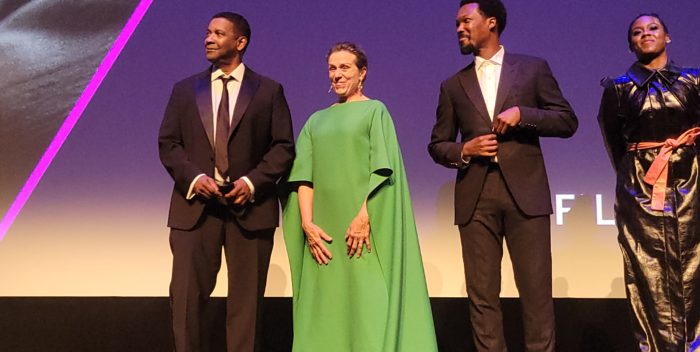 A second party in two days at Tavern on the Green: following the Wednesday night opening soiree for “The Many Saints of Newark,” the New York Film Festival was a little upstaged but carried on around midnight last night for “The Tragedy of Macbeth.”

Denzel Washington, who’d been doing publicity all day. skipped the whole thing. His co-star Frances McDormand, and her husband director Joel Coen, carried on without him. McDormand, a three time Oscar winner, looked stunning and actually happy for a change. Coen seemed overwhelmed and tired. It’s not easy making a masterpiece and then talking about it for 24 hours to group after group but that’s what they did.

“Macbeth” is pretty much the only movie that’s totally sold out at the New York Film Festival. Almost every movie has plenty of tickets looking for buyers. There are long lists on the festival’s website. It’s not like the old days.

At the screening, Coen Brothers regular John Turturro and his wife were seen, along with actor Delroy Lindo. At the end of the screening and Q&A, Lindo shouted out to Denzel and then made a big hop onto the stage so he could join Macbeth behind the wings. Maybe they took off together, explaining the lack of Denzel at Tavern on the Green. Also on the scene: Hamilton star and Tony winner Daveed Diggs.

At Tavern on the Green, I congratulated Ethan Coen, who had nothing to do with the movie but was in great mood. He said, “I know, I know, you liked everything I did in the movie. I didn’t do anything!” Ethan is still making movies with brother Joel, but he’s also writing plays and short stories. I told him I noticed the Coens’ infamous fictitious film editor, Roderick Jaynes, got a big credit. “No,” Ethan said, correcting me. “It’s Rodney Jaynes now. Roderick only works on movies we do together!”

Among the guests was the great actress Kate Burton with her husband and daughter. She told me she’s shot four episodes so far of “Grey’s Anatomy” and there may be more. “But you know, I’m dead,” she said, laughing. Her character, Ellis Grey, was killed off years ago. But lately “Grey’s” has become “The Walking Dead”!

Was it a better party than “Many Saints”? Well, they didn’t have the cool band that serenaded the “Sopranos” but there were better desserts. You can’t have everything!