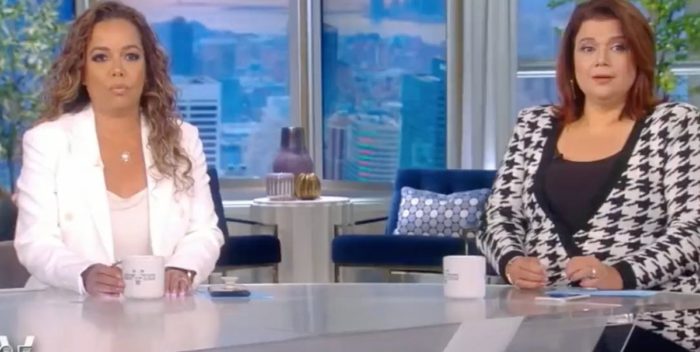 Two co-hosts tested positive for COVID this morning live on the show and had to leave the set during the show.

Joy Behar is now taking questions from the audience!

Both Sunny Hostin and Ana Navarro tested positive and had to leave the stage. Joy and Sarah Haines remain alone on the stage with no guest and nothing planned, so they’re reduced to taking questions from the audience. Of course, Joy could do the whole show herself.

Hostin and Navarro were each double vaxxed, so their cases are breakthrough. (Feel like going to the Governors Ball concert now?)

The result was Harris, who was supposed to do her first live in person interview on The View, had to do a shortened live piece from elsewhere in the ABC News complex.

Harris did get to announce her news, that broadband service was going to be made available more broadly across the country especially for students.

BREAKING: Sunny and Ana have been asked to leave the ABC studio because they tested positive for COVID.#TheView pic.twitter.com/DMIYrjHjid

.@VP Harris: "Sunny [Hostin] and Ana [Navarro] are strong women and I know they're fine, but it really also does speak to the fact that they're vaccinated and vaccines really make all the difference because otherwise we would be concerned about hospitalization and worse." pic.twitter.com/m5NMwT5dk8