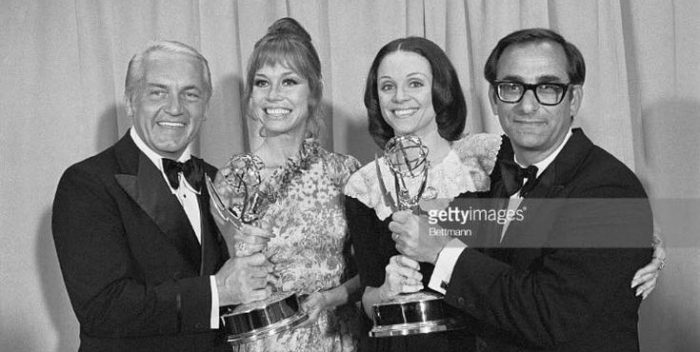 In a short period of time over night, directors Melvin van Peebles, 89, a legend, and Roger Michell, 65, a Brit star who made “Notting Hill,” have died. I’ll get to them in another filing.

This morning comes new that Jay Sandrich, the gold standard for directing American television comedies, has died at age 89. He won four Emmys, two of them for “The Mary Tyler Moore Show” and two more for “The Cosby Show.” He was also nominated for the hilarious “Soap.”

If you saw Jay Sandrich’s name on a TV show, you watched. Like James Burrows, he was it.There was no one better. He directed 119 episodes of “MTM” and 100 more of “Cosby.” All his credits were the classiest: “The Odd Couple,” “Lou Grant,” “That Girl,” many episodes of “Get Smart,” plus “Rhoda” and “Phyllis,” the short lived Stockard Channing series, and many others.

Jay Sandrich was a class act, a giant talent, and made huge contributions to the culture and history of classic TV. I thank him, and everyone else should, too. What a career!

Sandrich is survived by his second wife, Linda, whom he wed in 1984; his children Eric, Tony and Wendy; four grandchildren; a niece and nephew; and great nieces and nephews.

Donations in his memory can be made to Planned Parenthood, the Los Angeles Regional Food Bank and the Cradle to Career Aspen Community Foundation.