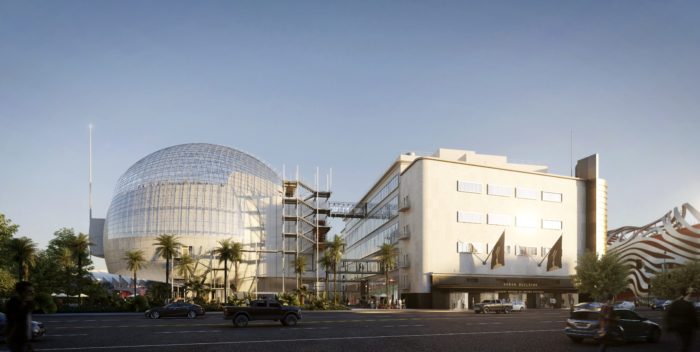 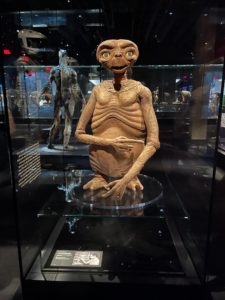 The much-heralded Academy Museum opened today for press and VIPs, the official opening is September 30th.   The Museum has been long in the making but it was totally worth it. Kudos to the Academy.

We spoke to the esteemed Bill Kramer, Director and President of The Academy Museum who told us: “This has been such a long-held dream of the Academy, of the city of LA, of the film industry.  We couldn’t be prouder to open the Academy Museum for all of us.  This is our museum, it’s everyone that walks in the door; their movie home. This is a movie museum for Academy members, film artists, Angeleno’s and film lovers from around the world; it’s for everybody.  This is our hometown industry and we need this institution that celebrates the work of our film artists and our film history.  And we have it here!” 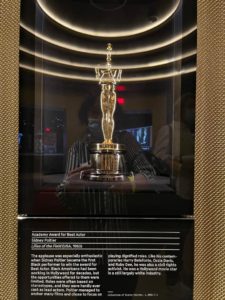 Bill earlier had told the VIP crowd in the 1000 seat David Geffen Theater, after being introduced by Oscar nominee Anna Kendrick that, “We know this Museum will become an instant landmark, a must see for residents and tourists alike.  To directly connect with the movies that have left an indelible mark on their lives.’”

Academy CEO Dawn Hudson and Film Academy President David Rubin followed and explained that the Academy wanted a museum 92 year ago.  Samsung heiress Miky Lee, who was a producer on “Parasite” and is Vice Chair of Academy Board of Trustees also spoke.  (The popular Ms. Lee was also the money behind Dreamworks back in 1995.)

A short film followed with Bob Iger and then Oprah Winfrey honoring Sidney Poitier; the lobby of the Museum is dedicated to him.  The famed Italian architect Renzo Piano then talked charmingly about his creation.  “I’m not good at anything by myself.  When I was a boy in Genoa I loved the sea and cinema.  It’s all in a movie, the light and shadow.  That is what is here.  This bubble will never grow up.” 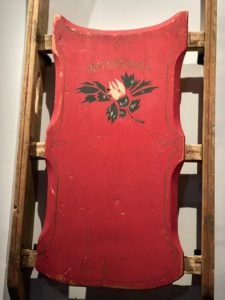 A playful Tom Hanks joked with the reticent press crowd by noting, “Thank you for holding your applause.”   Tom then went on to cheekily promote multiple times the ABC special, “A Night In The Academy Museum “ which he’s co-hosting with fellow Oscar winner Laura Dern on Oct 12th at 10pm. When the audience didn’t react the way charming Tom is used too, he quipped, “To paraphrase the words of Hans Solo as he was approaching the Death Star, I have a good feeling about this.  You know I thought that joke was going to kill, you guys are so jaded.”

Hanks went on to say that, “This Museum is like the Parthenon for movies. Movies continue to be the magical art that speaks to everybody everywhere.  This end result exceeds our dreams tenfold.” He ended it in true Tom style by exuberantly saying, “Boy Howdy hey- welcome to the Academy of Motion Pictures!”

The numerous splendors inside include the main exhibition, Stories of Cinema which is three floors and chock filled with thousands of iconic pieces; the ruby slippers from The Wizard of Oz, Star Wars droids, Black Panther suits, Tim Burton haunted houses, Peter Jackson’s heads from Lord Of The Rings and so much more. 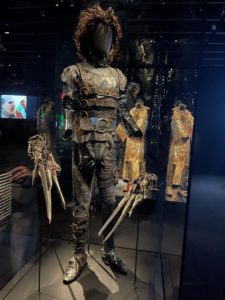 The Significant Movies and Moviemakers Gallery has six works and artists, the iconic Rosebud sled is included which was donated by Steven Spielberg.  And there is an original JAWS shark that greets you as you step off the elevator.

The Museum, to its credit, does not shy away from the controversies long surrounding the Academy: the lack of diversity, and the snail like progress that women, Latinas and Blacks have made.  There is a poignant empty display for Hattie McDaniel’s Oscar statue which she won in 1939 and went missing.  (McDaniel was famously forced to sit in the back of the room during that year’s ceremony because was Black.) A makeup and hairstyling exhibit is not sparing the displays of blackface and yellowface from the 1930s and 40s.  The display of the Mount Rushmore exhibit used in North By Northwest has a sign which mentions the desecration of sacred Lakota land. Black filmmakers talk about the release of DW Griffith’s The Birth Of A Nation, which reinvigorated the KKK in the 1930s.

Editing, backdrops, composers, all artisans are honored.  Snippets of the most iconic films of our time are throughout. Spike Lee has his own exhibit, with his personal memorabilia as does Pedro Almodovar, which is often racy and fascinating to watch.  Animation galleries abound and there is a fun Oscars Experience which creates an immersive environment that simulates the experience of accepting an Oscar on stage at the Dolby Theatre. (Yes, I partook.)

A room dedicated to the actual statues of Oscars past, with Sidney Poitier is front and center.  One of the museum’s inaugural temporary exhibitions spotlights the work of Hayao Miyazaki, the Japanese animator, director and producer behind Studio Ghibli.  You can lie down and look up at a blue sky and sit in the faux grass under a gorgeous light green light art piece.  Circular rooms are plentiful, to take a breather and watch old clips, sci fi films and so much more. To paraphase Tom Hanks, the Academy Museum so long in the making, celebrates the rich cinematic history that is Hollywood in a swell and splendid way!