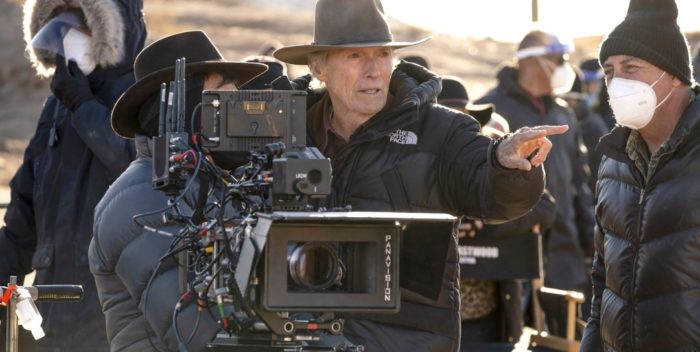 Clint Eastwood is 91 years old, has directed and starred in his seventh movie in the last seven years. It’s kind of amazing.  As productive as Eastwood has been as a director and an actor, this recent run will be thought as a golden period, from “American Sniper” — an Oscar nominee — through “Richard Jewell,” “The Mule,” and “Sully,” a Tom Hanks vehicle that holds up beautifully.

So here we have Clint himself starring in “Cry Macho,” based on a Richard Nash novel from the 70s and set in 1980. It co-stars a country singer, Dwight Yoakam, who doesn’t sing in the film, a Mexican actress (Natalia Traven) who doesn’t speak English in it, another Mexican actress who does, a 15 year old Mexican actor making his US  debut, and a rooster (actually 11 roosters). It also features the amazing Oscar worthy cinematography of award winner Ben Davis.

It’s a simple story: Yoakam’s character, Howard Polk, is a seedy business guy in Texas who’s been employing and taking care of Clint’s cowboy Mike for a long time. Mike is a rodeo guy and journeyman with a great hat, a typical Clint character. Howard wants Mike to go down to Mexico City, find his abandoned 15 year old son, Raffa, pry him away from his no-good, hard partying mother (who beats him), and bring him back. There’s a financial aspect, too, since Howard will use the kid as leverage in business dealings with the mother.

Mike says yep, he’ll do it, because he owes Dwight. Even though he’s 91. No one comments on that, even though Mike looks little frail at the beginning. But off he goes on the adventure, just as Clint did in “The Mule,” gamely and without hesitation. In short order he finds Rafa, played by the talented 15 year old Eduardo Minett, and they seek refuge with Marta (brilliant Natalia Traven) at her cafe, where she’s taking care of several small granddaughters. Rafa’s mom doesn’t like this, and keeps sending thugs after them.  Mike even punches one in the kisser. Simple, right?

We are far from “Dirty Harry” or “A Fistful of Dollars” or even “Play Misty for Me.” We’re also not on the grand level of Clint’s masterpiece, “Unforgiven.” This is a character study that strips away all the noise. It’s Eastwood’s sweetest movie, but that’s a deceptive way of describing it. As with a lot of his movies in the last decade — like my favorite, “Gran Torino” — Eastwood has developed an acute ear and X ray vision. He’s moving to his own different drummer, a rhythm that you have to adjust to these days. Listen: he’s telling us it’s important that “Cry Macho” is set in 1980 and rural Mexico, away from tech and cell phones etc.

A little of the set up is far-fetched, but I admire the fact that Eastwood still seems himself as a romantic figure. Good for him. (He gives all guys hope.) But once we settle in, Eastwood relaxes and so does Mike. He even has a conversation with a rooster. In his scene partners Traven and Minett, he’s found gems in that they make vivid portrayals immediate, and hold their own with Eastwood as if they’ve known him — and vice versa– for years.

“Cry Macho” hits theaters on Friday, and also HBO Max, where I suspect it will be a big hit. Davis’s photography is really sensational, I’m not kidding, I will go into a theater and see this one on a big screen just to revisit what he’s done with Mexico. (The government should give him an award.)

Is this the last Clint Eastwood movie? I sure hope not.