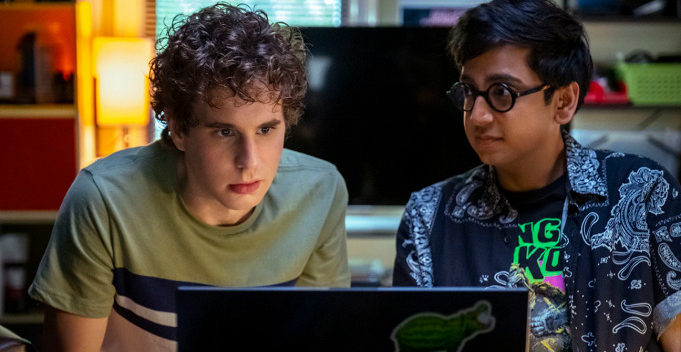 I went into the screening yesterday of “Dear Evan Hansen” a little shell shocked. The early reviews from the Toronto Film Festival and elsewhere were a little mixed. On Rotten Tomatoes the movie currently stands at 69, which isn’t terrible but it’s not a resounding referendum. Something went wrong in that opening night up north, that’s for sure.

“Evan Hansen” was a mixed bag on Broadway. You either loved it or questioned it. Here’s the story: Evan is an introverted lonely teenager who has no friends. His dad is off on a second marriage, his mom is a nurse who works all the time. He has a shrink who’s got him writing letters to himself — “Dear Evan Hansen” — as pep talks and journal entries. One of those letters is snatched at school by a kid with worse problems, Connor Murphy. When Connor kills himself, his parents find the letter and think Connor and Evan were besties.

Here’s where things go awry: Evan lets the Murphys and everyone else believe this lie. He becomes the Murphy’s surrogate son, and he’s thrilled. He has a crush on their daughter. At school he’s a hero and becomes the leader of a Connor Murphy movement for suicidal and troubled kids.

On Broadway, when Ben Platt originated Evan, this worked, kinda, because Platt was so talented, the songs were so good, and the audience is at a distance from the machinations on stage. Evan, I thought, was a liar and a sociopath, but young people loved and understood his choices. The show was a hit and won Tony Awards. Platt was launched as a star.

On screen, all of this is close up and a little hard to swallow. Platt, who’s a terrific singer and has lots of charisma, is now too old to play Evan. He’s trying hard– hunched shoulders, fetal positions, vacant eyes– to look like a troubled teen. Sometimes it works, but sometimes it doesn’t and it’s distracting. It’s not his fault. But he’s playing Richie Cunningham with an ice pick.

The whole cast is very good, from Julianne Moore as Evan’s distracted mom to Kaitlyn Dever as Connor’s sister. Amandla Stenberg is just wonderful as a girl in school who takes up Connor’s cause and trusts Evan. Amy Adams glows as Connor’s mom, doing the best she can with the character, as does Danny Pino as the stepfather. Colton Ryan gives the most interesting performance as Connor, the center of this whole affair.

You can’t argue with the look of the movie or the overall intention. Stephen Chbosky has made a polished film that delivers the Broadway musical to the screen efficiently. Young people will still identify with the kids’ needs to be “seen,” to the updated theme of troubled teens trying to sort out their feelings and figure out who they’re going to be.

And the songs are great, there’s no question about that. You’ll be humming them after you leave the theater.

But “Evan Hansen” on screen just highlights the show’s issues. Evan still seems like a sociopath. When he’s found out, he’s not shunned, he’s just let off the hook. We never really understand what happened with the Murphys, and we never really see their reaction to be so devastatingly hoodwinked by Evan’s lies. The show’s book is a great wind up without a successful completion. You see, at a movie, you can’t just finish with a song, a bow, and applause. The reality of what’s happened sets in.

Nevertheless, my guess is “Dear Evan Hansen” — coming just as school opens — will be a hit with kids. They’ll identify with a lot of what is on screen, just like the kids in the movie come to feel for Connor. As long as adults, like me, don’t nitpick the rest of it, everything should be alright.