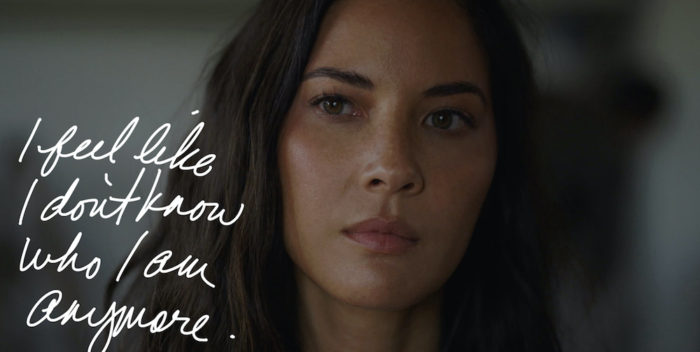 Talk about timing. Olivia Munn is on everyone’s Twitter right thanks to her relationship and pregnancy with John Mulaney. I almost forgot why she was famous:

Munn is an actress, remember? Although I can’t say I’ve seen her do that much outside HBO’s “Newsroom.” But in Justine Bateman’s “Violet,” which debuted at the Toronto Film Festival today, she gives a rich, affecting performance as a female movie executive in Hollywood trying to negotiate her own personal traumas and the hell of making a career.

Bateman, of course, is better known to us as Mallory from the classic sitcom, “Family Ties.” She wrote and directed this edgy little feature, and it’s an unexpected gem.

Violet is living with a friend while her house is being fixed from a flood. The friend, Red, is a hunk played by Luke Bracey. In her recent past, Violet burned down the apartment of her former lover. She spends little time on her personal life, chucking it all for her career. She hasn’t spoken to her mother, who we learn was mentally abusive, or her brother or aunt in years.

What Bateman’s done that makes this so interesting is that she’s opened Violet’s inner thoughts. We’re getting a voice in her that continually chastises her (Justin Theroux). She calls it “the committee.” We’re also seeing her thoughts written on screen in Violet’s handwriting. The combination of this is a sense that Violet is teetering on a breakdown of some kind, but she’s straining to keep it together.

In the old days the savior boyfriend would have been a Nice Guy Shlemiel, maybe played by Seth Rogen or Mark Duplassis. Instead she’s living with a Hunk and resisting him. It’s not a terribly sympathetic look. But Munn is so invested in Violet’s neuroses that it works. Plus she’s dealing with an evil boss in the form of the great Dennis Boutsikaris (where’s he been?). The politics of the movie production office are well drawn by Bateman, who’s no doubt seen it all.

So kudos to “Violet” and to Munn, for whom this role couldn’t have come at a better time. Reminding us of her acting talent right now is important, all things considered. And isn’t this a nice surprise from Mallory Keaton? Michael J. Fox played Alex, her brother , on “Family Ties,” and we were convinced she’d come to nothing. But she’s directed a film first, and done a fine job at that.