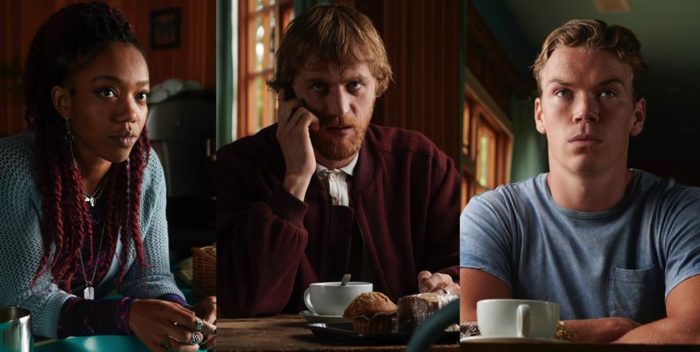 First Toronto film: “The Score,” written and directed by Malachiy Smyth, with songs by Johnny Flynn. And it’s a score. A plus.

TIFF isn’t offering any big films on their digital service and everyone is complaining. We don’t even get “Dear Evan Hansen,” opening the festival tonight. Most of the digital films are only available in Canada, if at all.

So I tried “The Score,” and loved it. A musical like “Annette,” except coherent, funny, beautifully made. Everything “Annette” was not, “The Score” is.

The performers are a trio– Johnny Flynn, who wrote the songs, Naomi Ackie*, who should be a star, and Will Poulter in a breathtaking performance. Imagine, three young sexy people who can act and sing, with terrific songs, catchy and well composed, and well sung, that fit in a plot that makes sense. I’ll take it!

Mike and Troy are low level gangsters, very low level, and they drive to a meeting at a faraway roadhouse (in rural UK). Gloria is their waitress. Troy and Gloria set eyes on each other and are in love. Mike, the “mastermind,” is waiting to consummate some kind of deal involving $20,000 in cash stashed in the boot of their Range Rover. A few others come and go, all excellent, but the story centers on these three.

Day changes to night, there are songs and a lot of smart talk. Smyth has written a lovely screenplay that must have been a play first and could be again. He’s opened it up for film. But the camera work and lighting are so good, and the actors are so surprising, that for 90 minutes you’re going to stick with it and care about all these people. Plus, there are a couple of plot twists to keep you on your toes.

So kudos to all these people. I saw Flynn off Broadway in “The Hangman,” and he was just sensational. He’s been in a few other things but is still unknown to Americans. Too bad. He should have a bigger career here. Poulter has also worked a lot, but this is the best thing he’s done.

TIFF may not be showing us big deal films, but “The Score” is a film festival find, which is really what it’s all about.

Since I’m in New York, if someone connected to this film wants to talk to me, I’m at showbiz411@gmail.com

*Naomi Ackie, I’m told, is playing Whitney Houston in the biopic, “I Wanna Dance with Somebody.” Now I have every faith in that performance.