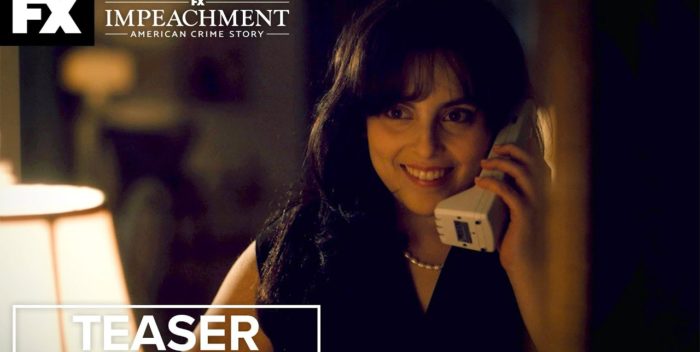 Ryan Murphy’s latest offering, back on FX this time, is an addictive, entertaining  and cringey can’t-take-your-eyes-off car wreck.

After watching the first seven episodes that are available to critics, Murphy’s latest installment of “Crime Story”  I can tell you that “Impeachment” has a bit less bite than  its predecessors but definitely has its own kind of dirty quirky charms. It’s a debauched saga that is addictive to watch.

The actors are across the board terrific especially Beanie Feldstein who plays Monica Lewinsky in as  immature but endearing.  Real-life Monica is a producer and script consultant, so the result of that is that it leans heavy on  Lewinsky’s  story flaws and all.

Co-star Sarah Paulson, a Murphy stalwart and an executive producer, plays Linda Tripp. She’s always terrific and throws herself into the role.  This role is made heavier for the actress as she burdened by prosthetics, a much talked about fat suit and heavy make-up but she still manages to make Tripp both sympathetic and vile.

Some of the same challenges affect Clive Owen who plays President Clinton with a down home and smarmy charm. Cobie Smulders nails the mad meanness of Ann Coulter. Billy Eichner plays Matt Drudge as the digging, quippy press soothsayer he indeed was. Annaleigh Ashford expertly plays Paula Jones with depth.  She doesn’t go for the obvious mocking of small town Paula as she easily could have. Judith Light is perfection as the opportunistic Susan Carpenter McMillan, who wormed her way into the Paula Jones drama to garner whatever press she could get for herself.

The stellar cast also includes Mira Sorvino as Monica’s protective Mother, Blair Underwood as Clinton fixer Vernon Jordan, Elizabeth Reaser as Kathleen Willey who accused Clinton of sexual assault, Rae Dawn Chong as Clinton’s elegant and loyal secretary Betty and more recognizable faces.  Edie Falco plays tough as nails Hillary, although critics didn’t see much of her, as we only had up until episode 7 of the 10 episodes in full.Margo Martindale is sensational as book agent Lucianne Goldberg.

The series gets punchier with each episode.  Beanie does a beautiful job showing us this young woman in her early 20’s who is naïve, flawed, vulnerable in a ‘relationship’ which is one sided and sad. Your understanding of Monica does bring up empathy instead of the punchline she’s long been in popular culture. The series sometimes teeters on camp, but then it hits you with meaningful and unjust scenes that make you indeed cringe.  “Impeachment: American Crime Story” bottom line is again, addictively entertaining to watch.