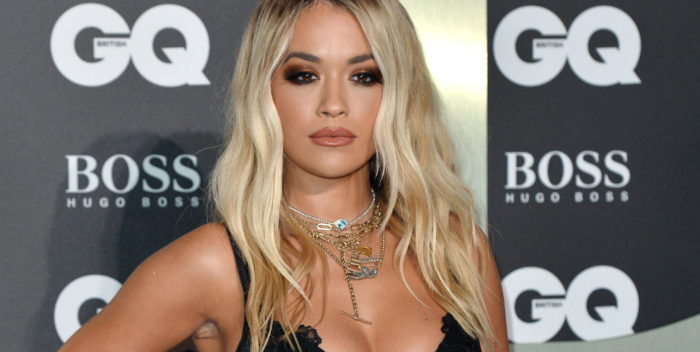 I have never understood who Rita Ora was. Is she a singer? A celebrity? An actress? A girlfriend to lots of famous guys?

Now that I’ve heard her sing “Seaside,” dropping tonight from Diane Warren’s album, “The Cave Sessions, Vol. 1,” I get it. She is actually a really good pop singer. “Seaside,” sung with Sofia Reyes and Reik, could be a breakthrough hit.

Can you blame me, though? Ora was recently pictured with “Jojo Rabbit” director Taika Waititi somewhere in the South Pacific. That’s usually how her name comes up. She’s been “linked to” a bunch of famous guys including, of course, Rob Kardashian, Bruno Mars, and Drake.

But records? She’s almost 31 and has released just two albums, neither of which did anything. In the UK she had a run of middling singles, but nothing here. And nothing recently.

So it’s a sweet surprise that “Seaside” is so catchy and well sung by Ora and her two compadres. When the video hits tonight or tomorrow, I’ll add it here. And I suggest radio programmers take it for a spin ASAP. You won’t be able to get it out of your head.

“The Cave Sessions” is full of potential hits, by the way. I love “Domino” with the singer LP. It’s a little reminiscent of “Exes and Ohs,” but better. Country fans are going to go crazy for “I Save Me,” with Maren Morris. (Pop fans, too.) Ty Dolla $ign, who I thought was a rapper, sings “Drink You Away” like an old fashioned crooner. Wait til you hear him. (And wait til country singers grab this song.)

And more: I’m not really a Celine Dion fan, but “Superwoman” sounds like a smash. John Legend on “Where’s Your Heart?” is his best track in ages. And, of course, there’s “She’s Fire” featuring G Eazy and Santana, already with over 3 million streams and blowing up everywhere. “She’s Fire” is also featured on Santana’s new album coming this fall. He doesn’t play guitar on other people’s records unless he likes the song. He told me over the weekend he loved doing “She’s Fire.”

So keep refreshing. I’ll have some updates on “The Cave Sessions” tonight…