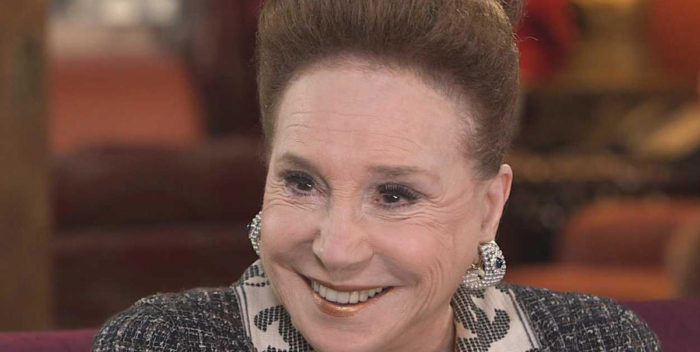 Showtime’s four part “Gossip” series dropped last night, a rarity since they put it all on their On Demand channel. I guess, better get it over with all at once.

The series is really about gossip doyenne Cindy Adams, now unbelievably 91 years old, famous for her daily (now thrice a week) column at the New York Post since the 1980s. On a personal note, I love Cindy and respect her incredible work ethic (which only comes up in the fourth chapter). She is an original and deserves all her success. She is totally self-invented. Her devotion to her late husband, Joey Adams, and to her mother was exceptional. Not a trained journalist by any means, she willed herself into a historic career. More on that later.

But the filmmakers decided to set Cindy’s story in the context of gossip since the 1980s including the history of the Post and Rupert Murdoch. This isn’t easy for me, because I’ve been around the whole time, know the whole story, I know what’s missing from this “documentary,” what the filmmakers didn’t know or excised, and so on. I know too much about all of this. All I could think while I watched the four episodes was, thank God I’m not in this.

They should have just made a documentary about Cindy. She’s enough to carry a two hour film that would have been more cohesive. Instead, there’s two more hours woven throughout about all this other stuff. Various friends and colleagues of mine turn up. Some are hilarious and honest, some aren’t. The best include George Rush, Ben Widdicombe, Flo Anthony, and Jeane Macintosh. There are others, I won’t get into. The filmmakers omit a lot of people who should be here including James Brady, Claudia Cohen, Susan Mulcahy, and Jeannette Walls. This is really criminal. Again, the filmmakers know very little. What a shame they missed so many great opportunities.

On the positive side, Liz Smith, who deserves her own documentary. comes off very well. Cindy says she’s not sure Liz loved her, they were rivals and Cindy protested Liz joining the New York Post. A couple of Posties say Liz’s column didn’t have any bite, which was very much not true. I wish Liz’s memoir, “Natural Blonde,” was still in print. I’m going to ask her Estate to do something about that.

Liz’s nemesis at the Post was editor-in-chief Col Allan, who comes across in this series like a dorky buffoon. Not mentioned in this film is that Col was removed from his position after two innocent people on the front page of the Post as the Boston Marathon bombers. He’s back there now, though, revving up the right wing attacks on Joe Biden and Kamala Harris.

So Col tells a story in “Gossip” that got my attention: he went to lunch with Tom Cruise to discuss the paper’s coverage of the Scientology star. During lunch, Tom’s two front teeth fell out on the table. And Cruise popped them back in! The diminutive star begged Col not to tell anyone, but Allan told Cindy when he got back to the office. He made Cindy promise never to say anything. But now he “outs” Tom. (Remember when Cruise famously got braces? He’s had had some dental issues, I guess.)

Writing a gossip column involves a lot of horse trading. I know that. But at the Post, it got out of control (and still is out of control). Don’t write this, I’ll give you something better and so on. At the Post it turned into payoffs. Writers got big book advances from Harvey Weinstein (thank God, again, I never did that). Free meals and various are a currency dealt in only at the Post to this day. It’s an open secret all over town. A lot of people in this movie are a little too candid about mucking around in this department.

One thing I don’t get about the filmmaking is that there isn’t a single reference to the one movie that binds this whole group, including me, together: “Sweet Smell of Success.” The story of gossip columnist JJ Hunsecker, based on Walter Winchell, and a small time flack named Sidney Falco, is literally the Bible of all columnists. (Also no mention of Winchell, just Cindy’s passing reference to Earl Wilson.) This is a grave error.

Instead, the filmmakers rely on Roger Stone as if he were a hero and oracle when he is known as a criminal and a bottom feeder. (He had to be pardoned by his crony, Donald Trump). Their take on Roy Cohn pales by comparison to the two real documentaries done on that evil creature last year. The filmmakers have little to no idea how all these people were connected, especially to Barbara Walters, a major missing part of this jigsaw puzzle.

Again, there’s a lot of information here. Cindy’s revelation of how she broke with Leona Helmsley is startling. But there is no mention of their involvement with Doris Duke, which would have made a better story than most of this stuff. In the story of how the Post was sold, bought, sold and bought again in the 80s, nutty real estate dealer Abe Hirschfeld is egregiously missing.

But “Gossip” is what we have, and some of it smells like Cindy’s short lived fragrance, which she jokes about. Indeed, Cindy is so self-effacing, honest, and real everything she says is worth listening to, twice.  “Gossip,” like “Leaving Neverland,” “Allen v Farrow,” and “Respect,” and a lot of other recent films purporting to deliver history, winds up being its own fiction. We are getting a generation of “non fiction” films that are worthless for veracity.