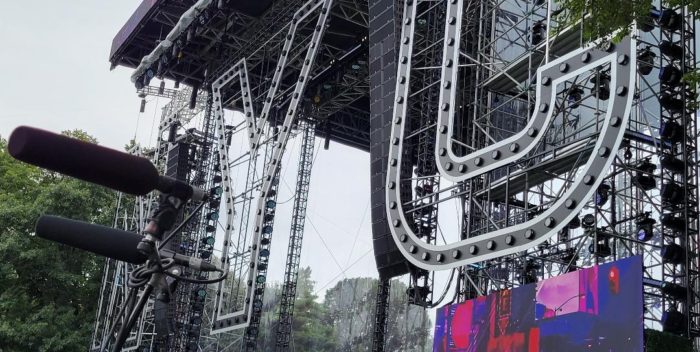 I wandered into Central Park this afternoon to pick up my press badge for Clive Davis’s mega concert set for tomorrow, to welcome back New York from the pandemic.

I chose a fortuitous moment, as did a few parkgoers who clamored around the perimeter of the Sheep Meadow close enough to see the stage. We got a dose each of Elvis Costello, Barry Manilow, and Maluma rehearsing for the show. (I missed the Killers, who were next, but I had to go!)

Just the three acts I saw were special enough that the whole thing tomorrow is going to be off the hook. I did see the legendary Rickey Minor on stage leading the large band through music from these diverse artists, and getting it all right. And loud, baby! 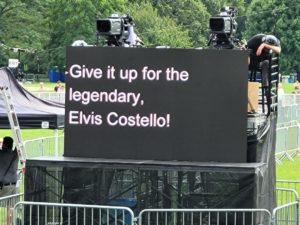 Manilow ran through some of his best known hits. When he started “Copabana,” nearly everyone near or below the stage started dancing. It was pretty fun. They’d already been warmed up by Maluma, who I’d never seen in person before. This guy can sing. And when he started, it was like bees to honey. People around the park came out of the woodwork singing along with him. Wild.

Elvis Costello was my focus. Despite the intense humidity, I waited for him to knock out two big rockers with Minor’s band. Fans will not be disappointed, but I won’t give away his selections. The crowd will love it. 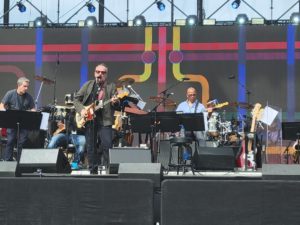 Just as I was leaving, The Killers emerged on the lazy Susan roundtable stage. What I figured out is that one act is playing and another is on deck, so the show will be nonstop hits. Bathroom breaks may be hard to come by.

The show — which could be four hours– is free and there isn’t a bad place to plop a beach towel. Plus the weather gurus insist we’ll be okay.

Who else is on the bill? Uh, Bruce Springsteen, Paul Simon, Wyclef Jean, Jennifer Hudson, Santana, Rob Thomas, Patti Smith and so on and so on.

So brace yourselves. Of course you can see it on CNN, but there’s nothing like being there. Hearing live music waft over the Park is like magic.

PS You know Clive Davis is 89 years young. He’s had more events this year than anyone– and kept us busier than any junior people in the music biz! Bravo!

Also, COVID rules are strictly enforced. Everyone there was very serious about masks, vaxxes, etc. I’ve never seen such meticulousness. Thank you to all involved!