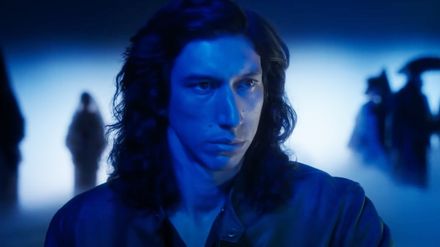 Let’s cut to the chase.

The duo called Sparks was never popular. I don’t know how they resurrected themselves this year with a documentary and this movie, “Annette,” directed by Leos Carax.

“Annette” is not a musical. It lacks music. It also lacks a plot, characters, or coherence. I don’t know how Spike Lee could have presided over a jury that would give Carax best director at Cannes. Spike is such a literal and concrete director. “Annette” would never pass muster to leave his editing room.

Is it stylized? I guess so. Not really. The frames look good, but they are of empty calories. “Annette,” you see, is a metaphor or an allegory or something. It’s a baby, but not real, a doll, like Chuckie, given birth to by Cotillard, who then dies. Driver’s character exploits Annette for profit in Hollywood. I think. Who knows?

It’s supposed to be an “opera.” It is not. Verdi, Pucci, and the rest of them are retching in heaven at the mere mention of that. Is it an opera within something else? I have no idea. Seriously. “Annette” is unwatchable. I can’t imagine what the actors thought as they were put through these paces.

As something experimental, if you’re on drugs at home, “Annette” might be fun to watch on Amazon Prime. Spending money in a theater? I beseech you not to do that unless you are financially independent and cannot find another way to spend your money. You’d be better off lighting it on fire.

PS The whole Sparks is Back thing eludes me. According to Buzz Angle, they’ve sold 8,300 CDs and downloads so far in 2021, a total of 15K including streaming.