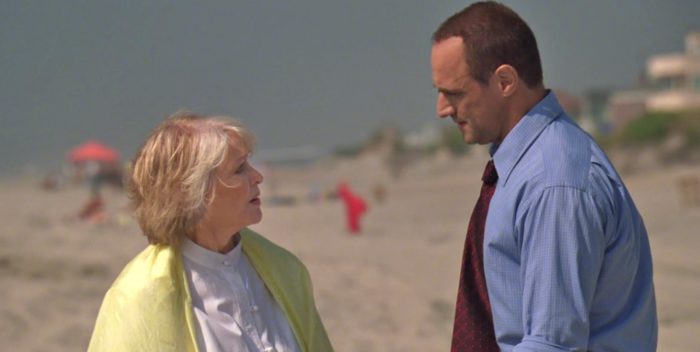 Big doings in the TV world:

Oscar, Emmy, and Tony winner Ellen Burstyn is reviving her character as Elliot Stabler’s mother, Bertie, which she started on “Law & Order SVU.”

Burstyn is returning as Chris Meloni’s mom after winning an Emmy in 2009 for playing the role on the original series. Now she’ll turn up on “Organized Crime,” maybe in a cross over with “SVU” since it was Mariska Hargitay who announced all this on her Instagram account.

“SVU” has been shooting on the Upper West Side all week, late at night. I saw them last night on upper Broadway. Anyway, if Ellen is coming back it means she’ll get another Emmy, that’s how it is, she always deserves awards, she’s heads and tails above almost everyone else around!

“Organized Crime” is breaking itself into 3 eight episode arcs this season, the last one bringing back Dylan McDermott from the first season. Hopefully they’ll add characters and stories and start opening up the seaso so it’s not just “Law & Order: Chris Meloni.”

Charles Shaughnessy, you know him from “The Nanny” as rich theater producer Maxwell who eventually marries Fran Drescher. For years and years he’s also been part of the NBC soap, “Days of our Lives” playing a spy. Now he’s going to do a gig on rival soap, “General Hospital.” Fans are a little perplexed because Tristan Rogers, who’s been with “GH” since the 80s, and plays a spy, hasn’t been on show all summer. Shaughnessy was last on “GH” also in the 80s for a minute before his “Days” run.