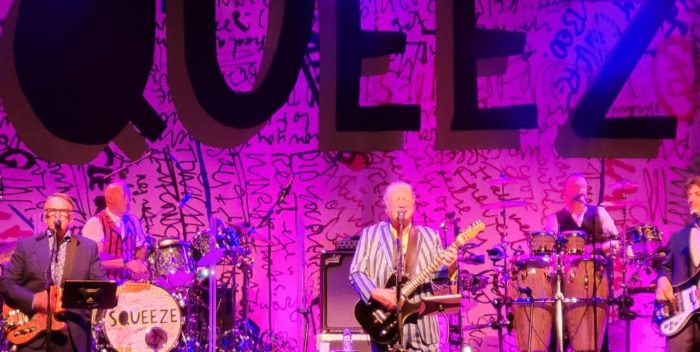 First of all, it’s unfair to call Squeeze the 80s Beatles, but I got your attention. From the mid 70s for at least twenty or more years, Brits Chris Difford and Glenn Tilbrook turned out classic pop albums that recalled the best writing and singing of Lennon and McCartney but surely with their own twists. They were not and are not a cult group by any means. They had hits galore, too. They led the British New Wave and had plenty of presence on MTV.

(Squeeze should be in the Rock Hall with the Police, Pretenders, Elvis Costello, and Talking Heads. Don’t get me started.)

And now they are back on tour in America after the pandemic literally brought their previous schedule to a screeching halt in March 2020. I caught them last night at the rustic Ridgefield Playhouse in Connecticut on their own, but they are also part of a parallel package with Hall & Oates going to huge venues like Jones Beach.

All that out of the way, it was a joy to see them, especially in a small theater. Their backing group is a sensational band that could easily take on any of “today’s” pop rock bands in a battle. The musicianship is astounding, from drums and percussion, bass, keyboards, and accordion. For most songs, Squeeze is also a three or four guitar set up, all of which creates a gorgeous sound.

And then are the main guys, Difford and Tilbrook. The latter takes up the lions share of vocals, although the mix of their voices remains unique, a sweet and sharp combo. Their songs are the same, not a Beatles derivative but strongly, a next generation delivery of stories, witty observations, eccentric characters, love gone wrong and sometimes right.

You know their biggest hit, “Tempted,” and so does the audience, which sings along with joyous abandon. There’s also “Hourglass,” “Cool for Cats,” “Goodbye Girl,” “Pulling Mussels from the Shell,” “Black Coffee in Bed,” “If I Didn’t Love You, I’d Hate You,” and so on. Squeeze produced more than a dozen top notch albums in their time, including the outstanding “Argy Bargy,” and “East Side Story” produced by Elvis Costello (and Dave Edmunds on the lead track). Those are starting points for newcomers and nirvana for concrete fans.

That the songs have stood up for 40 years or so is a tribute to the writers in so many ways, as records that were produced so meticulously that they sound contemporary and ageless. That the band (Simon Hanson, Stephen Large, Steve Smith, Owen Biddle, Melvin Duffy) are so exceptionally designed doesn’t hurt. They can bring soul to country and vice versa in disarming ways.

And don’t think of Squeeze as a group from the past. They’re still writing songs and making records that are just as good as ever. Last night I loved a 2017 song called “Please Be Upstanding” that song supervisors need to start putting into TV and movies. It’s a little gem, one among many.

See Squeeze in your town, on their own and or with others. And special treat: Tilbrook’s 18 year old son, Leon, is often the opening act. The kid is the real deal, and I’ve never seen a teenager so poised and charismatic on stage. His parents are going to have trouble getting him to stay in university. I saw Shawn Mendes at this age; Leon (named for Leon Russell and other blues musicians) is the British version!