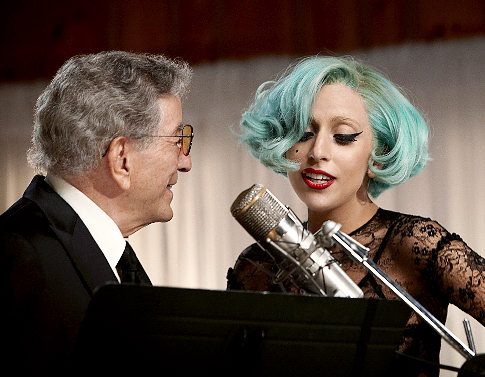 How do we know? From a press release? No, from a billboard in mid town. An old fashioned way of communication. Carrier pigeons are next!

I told you about “Love for Sale” in 2014, and I thought it would be released today, on Tony’s 95th birthday. Alas, the powers that be have chosen October 1st, which is also one after it could be eligible for the Grammy Awards next January.

WTH? Tony is 95 and dealing with Alzheimer’s. If he’s going to get one last set of Grammys wouldn’t it be better to do it sooner rather than later? Well, they must have some good reasons.

A video is coming Friday with the track “I Get a Kick Out of You,” on the mostly irrelevant MTV on Friday.

Well, at least today is Tony Bennett Day in New York. And he has a beautiful plaque on a bench in Central Park. And tonight he celebrates his birthday by performing at Radio City Music Hall with Lady Gaga.

5 – I Concentrate On You

9 – Just One of Those Things