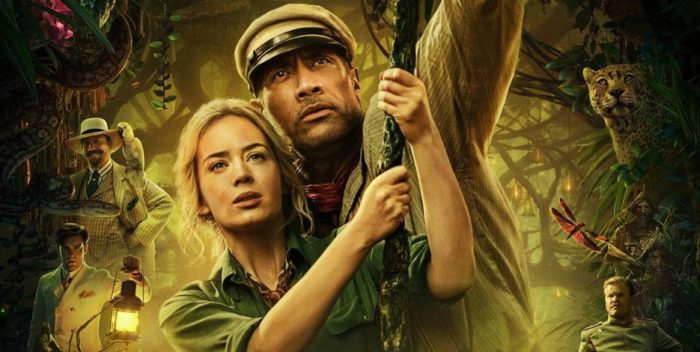 “Jungle Cruise” hits all the right notes and is a movie trip well worth taking.  Based on the theme park ride, “Jungle Cruise” is a celebration of the ride; a cheeky, frolicky fun homage to “The African Queen,” “Romancing the Stone” and then throw in all what Disney does best.

Directed by Jaume Collet-Serra “Jungle Cruise” stars the irrepressibly charismatic Dwayne Johnson as the skipper Frank Wolff, and the sardonic and marvelously deadpan Emily Blunt as Lily Houghton, a feminist Botanist on a mission.

The film is on solid terra ferma from the start as the chemistry between those two is off the charts charming and simply adorable. There is a wonderful turn by British comic Jack Whitehall who hilariously and poignantly plays Lily’s at-times snooty, loyal gay brother McGregor (his homosexuality is dealt with beautifully in the film.)   Weave in the hapless sunburned boat-lord Nilo played by Paul Giamatti, the evil but misunderstood conquistador Aguirre played by Edgar Ramirez, and the evilest of them all, Prince Joachim–always loyal to his German Kaiser– played pitch perfectly by Jesse Plemons, the cast are all first-rate.

The twisty story is that wisecracking Skipper Frank, whom Lily insists on calling Skippy much to his annoyance, is enlisted by her to bring her and her brother down the treacherous Amazon to uncover an ancient tree whom it is said has magical healing properties.  Frank is used to taking tourists with whom he has a captive audience for his borscht belt, cheesy type of  humor.  So the beginning of the trip is tricky is all.  The trek and the saga that takes them to find the tree, avoid the bad guys and discover their love for each other.

Of course it’s a happy ending, this is Disney, and the ticket to a voyage of pure escapism.  James Newton Howard’s score is majestic and fun, which is weaved in with nonstop action humor and plenty of scary parts too thanks to top notch CGI. The audience will surely have an entertaining time navigating their movie going fun!

“Jungle Cruise” is in theaters tonight, set for a big weekend, and on Disney Plus’s Premiere Access for 30 bucks.