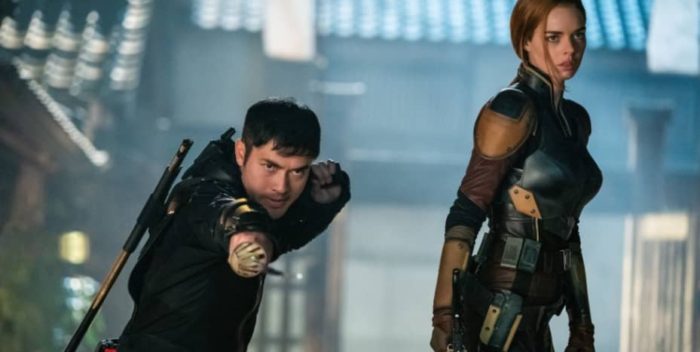 This was not a happy box office story unless you were The Rock.

He once starred in a  “GI Joe” movie that made a lot of money. This weekend, he soldiered on in “F9,” one of the big hits of the post pandemic summer.

The new “GI Joe,” called “Snake Eyes,” was a disaster. It made $13.3 million in its opening weekend, having cost $88 million. At least. Paramount, having great success still with “A Quiet Place II,” crapped out here. Maybe foreign territories will pitch in.

“Snake Eyes” had terrible reviews, and was beaten by another bad movie, “Old,” directed by M. Night Shyamalan. “Old” pulled in $16 million. I can’t imagine anyone liked it. Critics didn’t. “Old” had a small budget — and looks it– just $18 million, so they’ve made their money back. But you’ll never get back those two hours.

“Joe Bell,” a movie for which Mark Walhberg gained a lot of weight, was one of his worst openers of all time — just $700K. Released by Roadside, er Roadkill Attractions which can take almost any star and destroy their cume. The per screen average was just $646 at 1.094 theaters. People spend more than that at Wahlburgers. (Not really.)

“Space Jam 2” fell by 69%, erasing its gains, collapsing under its own weight. New total: $51 million, which is what LeBron James spends on lunch.

The sorta Bruce Willis movie I wrote about yesterday, “Midnight in the Switchgrass,” played in one theater in Manhattan and one way out on Long Island so it could qualify for something. Medicare?

Otherwise, “F9,” “Black Widow,” “AQPII,” and “Cruella” continued to be of interest to those willing to venture into theaters.