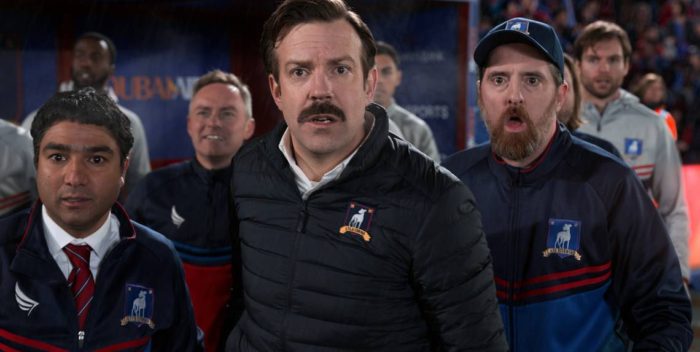 Lasso, of course, is played by Jason Sudeikis who is also the co-creator and producer. He’s up for an Emmy and has already won a bunch of awards for playing this trenchant fish out of water.

Lasso is in the UK, far from home and coaching a fictional London soccer aka UK football team that is in the athletic dog house.

Once in a premier division, the group of misfit players and coaches are looking up at the sidewalk trying to figure out how to get back on top.  Lasso came over the pond knowing little about the sport, and that’s where the show has its major sweet spot.  Lasso is game to learn, he’s empathetic, honest, kind and genuine.

Topping it all off is his signature home spun style wisdom.   Rapid fire quips from Sudeikis and his ‘team’ of terrific actors just don’t stop.  They all are equal to Sudeikis’s massive charm and appeal.

The second season is even better than the first, as it navigates the up and downs of the first season. Apple TV rightfully doesn’t want spoilers, but suffice to say that Ted’s personal issues come more into play, the quirky characters veer into territory that’s deliciously unexpected,  a Lasso jolt that the audience is craving which the show lives up too many times over.

“Ted Lasso” is sublime, one of the best series on TV and not to be missed.  “Lasso” most certainly deserves all the accolades it’s receiving and more.