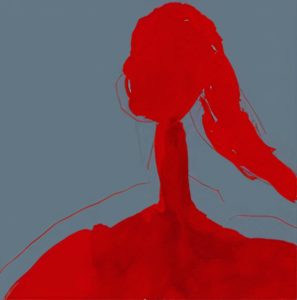 UPDATE Tickets have gone on sale for the Thursday event in Atlanta. Looks like “Donda” should drop that night.

Artwork may be this painting by the famed artist Louise Bourgeoise, if Kanye cleared the rights.

EARLIER Kanye West is readying a new album. It may be called “Donda,” the name of the album he didn’t release two years ago.

That was before Kanye backed Donald Trump and announced “slavery is a choice” to his fans, then ran for president for a nano second. And now he’s in the middle of a divorce from the mother of his four children, Kim Kardashian.

Bipolar and often out of control, Kanye held a listening party in Las Vegas Saturday night for among other people, basketball great Kevin Durant and radio personality Justin Laboy. This was after the Big 3 basketball game in Vegas, where Kanye showed up wearing a ski mask.

Laboy hit Twitter tonight raving about the album, which he says will drop this week. Or not. With Kanye, a release date is a fungible thing. He’s also been designing really ugly clothes for the Gap. We can only guess at some of this since he left Twitter at the end of 2020 after several breakdowns and public embarrassments.

Laboy wrote: “Kanye played his new album for me & @KDTrey5
last night in Vegas. Man listen! The production is light years ahead of it’s time, and the bars sound like he’s broke & hungry trying to get signed again. Any artist who plan on dropping soon should just push it back”

He also said: “Kanye West album is really done. When it drops this week, we probably not going to listen to anything else for a while.. Let me go enjoy all the current artist I’m listening to until then. God bless”

But what is Kanye’s audience? He hasn’t had an actual hit in ages. His pro-Trump stance, which he has never disavowed, may have cost him a big chunk. “Slavery is a choice” didn’t help either.

The word is a huge listening party is planned for this Thursday in Atlanta. Then maybe the album drops at midnight. Will anyone care? We’ll see.