UPDATE There was a 15 minute total standing ovation apparently. Originally it was said to be 9 minutes, but it went on and on according to my spies.

The French Dispatch has finally arrived in Cannes, a year late.

Director Wes Anderson brought an all star cast to the Croisette tonight but refused to give a press conference. The word is he was avoiding questions about his long time producer Scott Rudin, who has been made a pariah on Broadway for having a toxic work environment.

Todd McCarthy reviewed “The French Dispatch” for Deadline.com calling the director  “the king of twee.” McCarthy writes: This is Anderson in full flower, one that only grows in a rarified altitude… this is a film about and for The New Yorker constituency. If Anthony Lane doesn’t like it, there will be a price to pay. Searchlight Pictures probably shouldn’t even bother to release it in the red states, except maybe in Austin.”

#TheFrenchDispatch cast strikes a pose at the top of the #Cannes steps. pic.twitter.com/2LCnHs3lrQ

Co-star Timothee Chalamet wore a designer suit that made him look like the Tin Man. The suit has gotten more attention on line than the movie.

Disney (Fox) Searchlight brought a lot of people for this premiere, so they spent some big bucks. Bill Murray, Benicio del Toro, Tilda Swinton, Chalamet, etc are all four star travelers. Plus I’m sure there’s a big fancy dinner after the screening.

Frances McDormand did not attend. Apparently, there’s a sex scene between her and Chalamet that has set jaws dropping and tongues wagging. Not for the faint of heart. 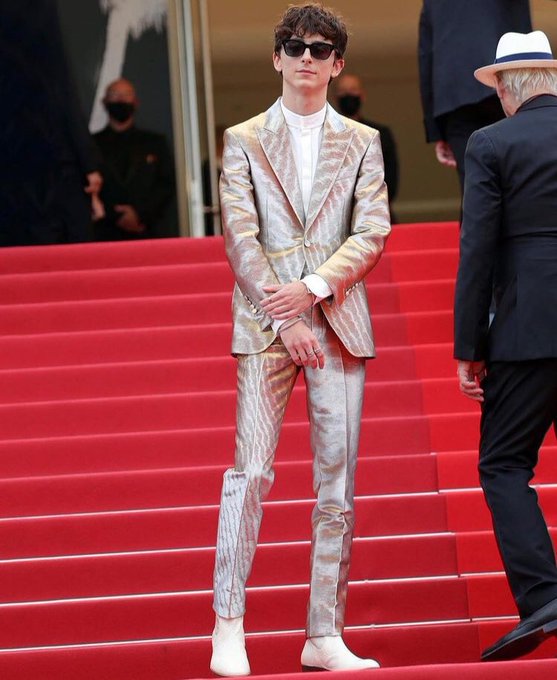