We already have the new Billie Eilish.

Totally unknown to but a handful of people, 22 year old Claire Cottill has made the cover of Rolling Stone’s digital issue today. Her stage name is “Clairo.”

It won’t be long before Clairol hair products get involved because her father is a top marketing executive from places like Procter & Gamble and Starbucks. Geoff Cottrill is the new Showbiz Parent of the Year. In 2010, he was Brandweek’s “Marketer of the Year.” He worked at Starbucks’ HEAR Music. 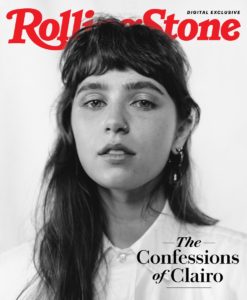 Geoff Cottrill has been a co-chair of Musicares at the Grammys. So you can imagine that Clairo will be heavily featured this winter on both the Grammys and the Musicares Person of the Year show.

Clairo’s got an album coming out called “Sling.” Dad has cooked up a whole theme for her about being indie, going with an indie label. Clairo is the biggest  outsider who was ever an insider. She’s already been on “The Tonight Show with Jimmy Fallon.”

Her single is called “Blouse.” Not to be too cynical but it’s a girl with a guitar. We’ve heard it before. “Blouse” is well produced, beautifully sung. It sounds like someone cloned Carly Simon from 1971, which isn’t a bad thing. Billie Eilish must be semi-horrified. But “Blouse” will be a bit. It’s built that way. “Blouse,” like “Sling” comes from the biggest insider producer of all, Jack Antonoff, the man behind Taylor Swift, Olivia Rodrigo, Katy Perry, and everyone on the radio right now.

Between Fallon and the official video, she’s got 800,000 YouTube views. There’s more to come. I kind of feel bad for her. The whole thing smacks of nepotism. It’s a cynical move to create a pop star Frankenstein. Even if she’s good, how can we judge? Clairo has been forced on us like Rice Krispies.

Joni Mitchell once sang about “stoking the star making machinery.” This kind of thing is an old story. The musical “Bye Bye Birdie” was all about the making of an Elvis Presley type star. And now we have Clairo.