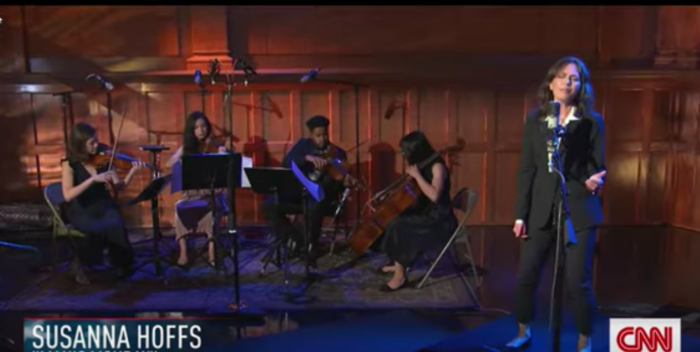 Um, I think we all missed this amazing performance from July 4th on CNN. Susannah Hoffs of the Bangles sang her famous Prince hit, “Manic Monday,” live and in studio backed by famed producer Peter Asher and a wonderful band. They also played the Bangles’ “Eternal Flame.”

Peter tells me he and Susannah are working together. Also, Peter is appearing at New York’s City Winery on July 26th and 27th with Kate Taylor, Albert Lee, and Leland Sklar, which should not be missed. His show is a charming mix of real rock anecdotes and pure 60s and 70s music. It’s always an enchanting evening. And I’m looking forward to hearing Sister Kate!

You know that Peter was half of Peter & Gordon, discovered James Taylor, produced and managed James, and Linda Ronstadt during their run of hits, was nominated for an Oscar recently, what else? He also ran Apple Records, the Beatles’ label. His sister, Jane Asher, was Paul McCartney’s girlfriend in the 60s. Peter & Gordon had the only Lennon-McCartney song written just for them, “A World Without Love.” It went right to number 1.

Anyway there’s Peter sitting down, playing the guitar behind Susannah. Maybe he’ll produce a whole album with her. She’s one of my favorite singers. (Did you know she’s been married forever to award winning director Jay Roach?) Check out the cool records she made with Matthew Sweet, as well.