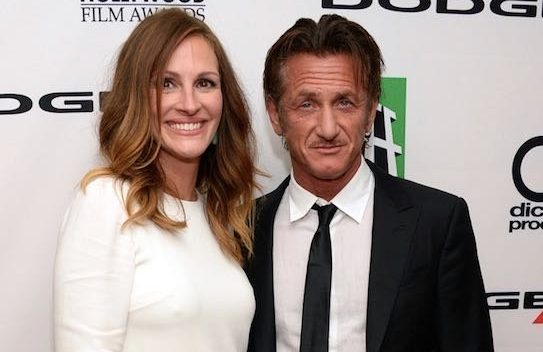 His kids, Dylan and Hopper, each have roles. Dylan is actually the main character, Jennifer Vogel, who wrote the book the movie is based on called “Flim-Flam Man: The True Story Of My Father‘s Counterfeit Life.”

But the Penn kids aren’t the only people close to the director involved in the making of “Flag Day.”

The cinematographer is Daniel Moder, whom you may know as the husband of Julia Roberts. Moder doesn’t work a lot. His last feature film was called “Ibiza,” made in 2018 for Netflix but mostly known. It starred Richard Madden, Gillian Jacobs, and Vanessa Bayer from “SNL.”

There’s a reason no one’s seen “Ibiza,” which has a 67 on Rotten Tomatoes. According to the IMDB: “The Balearic government considered whether to take legal action against Netflix because of this film. According to them, Neflix took advantage of Ibiza’s image by naming the film after the island but actually shooting it in Croatian locations instead. They also argued that this film not only perpetuates harmful stereotypes about Ibiza but it also clashes with the tourism board attempts to subvert them. ”

“Flag Day,” I’m sure, will have a better reception.

Here’s a look at Moder’s work in “Ibiza”: