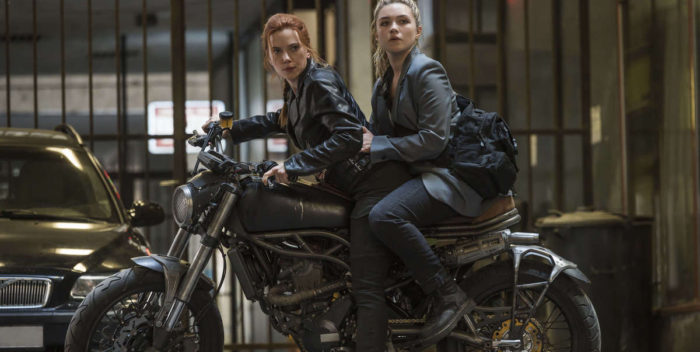 I don’t know Cate Shortland, a British woman in her 50s, convinced Kevin Feige to let her direct “Black Widow” for Marvel, but I’m sure glad she did. She must have really come in prepared, but she took the reins of this $200 million extravaganza, the first woman to direct a Marvel franchise movie, and blew the lid off of everything, right through the glass ceiling. Bravo!

“Black Widow” is a year delayed by the pandemic, and years more delayed by everyone being frightened of a superhero movie led by women. Not one, but many. Not just Scarlett Johansson, whom we know as Natasha Romanoff aka Black Widow via many Marvel movies. But Florence Pugh as her sister, Rachel Weisz as her mother, and the cadres of women who make up the brainwashed “widows” who think they want Natasha dead.

Can you see from my description this is a family movie? It’s a little like F/X’s “The Americans” told with special effects, super powers, and in space. That’s okay. The conceit works perfectly as Natasha’s childhood and origin story are explored fully. We meet the people who raised her including David Harbour, hilariously, as her father. This much I can tell you: as in “The Americans,” they are not biologically a family. But they are one nonetheless.

Shortland commands quite an army here, as “Black Widow” is 75% action that never stops. When it’s in motion it’s relentless, and the effects are pretty stunning. There are a couple of sequences you will “marvel” at in their construction.

But there’s also a screenplay full of character and humor. I laughed more than a few times, in the right places, and you will, too. It helps that the four main actors are among the best you can hire. Think of it– Rachel Weisz, an Oscar winner, is now flying planes through space, and plotting all kinds of machinations she wouldn’t find in Harold Pinter. Harbour comes from theater. Pugh already has an Oscar nomination for “Little Women.”

And then we’ve got very solid supporting work from O-T Fagbenle (of “Handmaid’s Tale” fame), Oscar winner William Hurt (looking, I’m sorry to say, unwell), the mighty Ray Winstone, and Olga Kuryenko. There is not a slouch among them. So, of course, the whole enterprise feels intelligent and up to par in ways you don’t expect.

And while Pugh holds her own ferociously, “Black Widow” is Scarlett Johansson’s movie. She really waited patiently through “Avengers” movies for this shot, and the pay off is tremendous. Little girls are going to follow her down the street once they’ve seen this movie. Grown men will, too. She’s snazzy, fun, athletic, beautiful, smart, and she kicks ass.

I’ve no doubt there will be at least two sequels, as there should be. Marvel fans will love the Easter eggs and references to past Avengers adventures. And there’s a scene way at the end of the credits that will blow everyone’s minds. Someone turns up quite out of the blue. Just be careful not to give it away. I’m doing everything I can to stay silent on this subject.

So: $100 million weekend? I’d say so. I can’t see why not. This is a reason to make sure you’re vaccinated. You’ll want to see “Black Widow” in the a theater, and maybe a couple of times.