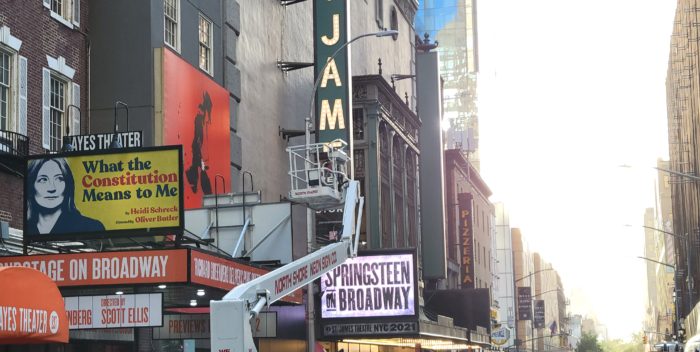 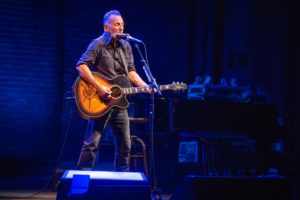 Bruce Springsteen made an emotional, triumphant return to Broadway tonight at the St. James Theater. His audience included the governor of New Jersey, Phil Murphy, but that didn’t stop Bruce from joking about his arrest last year at a state park.

“Two shots of tequila and I wound up in Zoom court,” he quipped. “The case was the whole United States versus Bruce Springsteen.”

The new iteration of Springsteen on Broadway had some references to the pandemic and to current topics. There was no mention of George Floyd but the song “American Skin (41 Shots)” was added as a subtle nod to race and the police. It was absolutely mesmerizing.

There were many musical highlights but my favorite was an unexpected and charming duet by Bruce and wife Patti Scialfa on the song, “Fire.” The couple has just celebrated their 30th wedding anniversary which, in rock and roll terms, is the equivalent of 100 years. Bravo! They are clearly soulmates.

This was the first post pandemic performance in a Broadway house. It was sold out, everyone was cheek by jowl. Bruce said it was a thrill to see everyone together, mask less. It sure was. 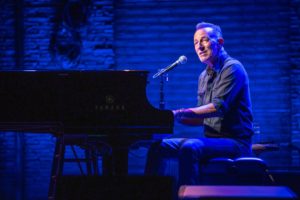 Also in the house: E Street Band impresario Little Steven van Zandt who came in just before Bruce was on stage and was ushered to a front and center seat. The audience went wild, cheering him.

Otherwise the audience was a range of ages, and all big Springsteen fans of course. I met two guys my age from Santa Monica, California who told me they’d paid over $500 a ticket that morning with $300 handling fees on StubHub. They didn’t care. They’d seen the show the last time, and loved it.

I hadn’t seen the show since the night before it opened in 2018. Bruce struck me as highly emotional this time around, more relaxed and engaged. There are so many takeaways from this opening night, starting with how multi-talented Springsteen is on a deep level, alternating between piano and guitar. We don’t think him of as a pianist, not like Elton John or Billy Joel. But he is quite accomplished on the ivories.

Toward the end of the show, Bruce — who was quite philosophical about his upbringing and the arc of life, wiped away tears. He’d spoken about his mother, who is 95 and has had Alzheimer’s for ten years. His father, who died years ago, looms large for Bruce. He told us the reason he was happy to return to Broadway was to see the ghosts of his father, of Clarence Clemons, Danny Federici, and others he’s lost and misses. 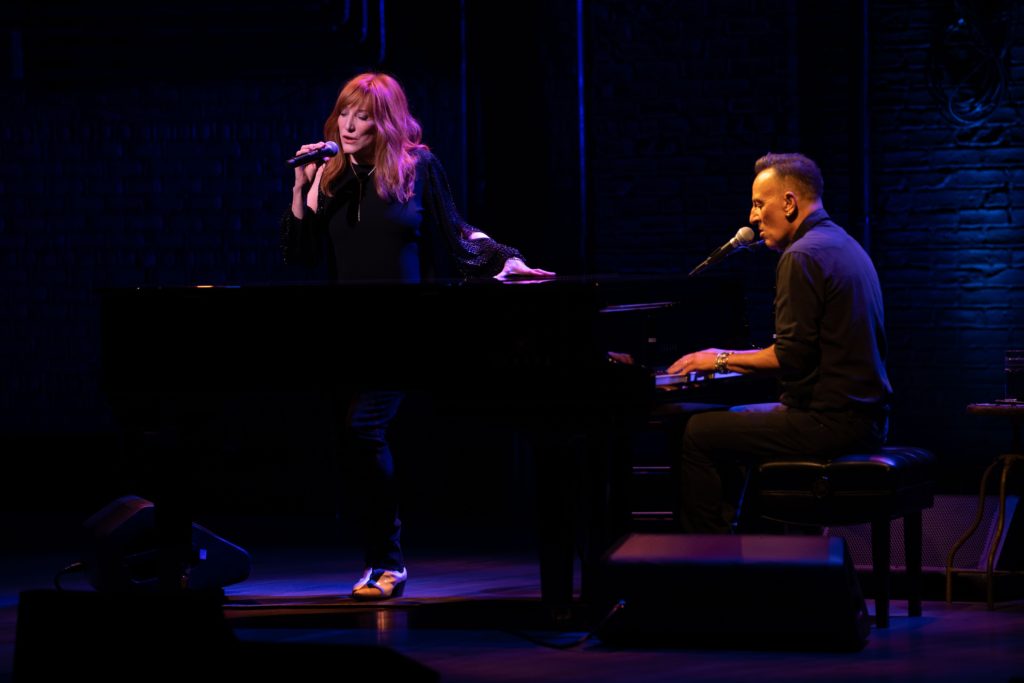 At 71 — and not looking 71, mind you — he’s plumbing new depths during this run that are disarming, charming, and challenging. “Born in the USA” is a blues song now, described by Bruce as “the source of much confusion” for how it’s been misinterpreted over the years. As the show builds to its ending, songs like “The Rising,” and Land of Hope of Dreams,” and “I’ll See You in My Dreams” are so profoundly beautiful and meaningful you see the full scope of Bruce Springsteen’s artistry. It’s quite stunning.