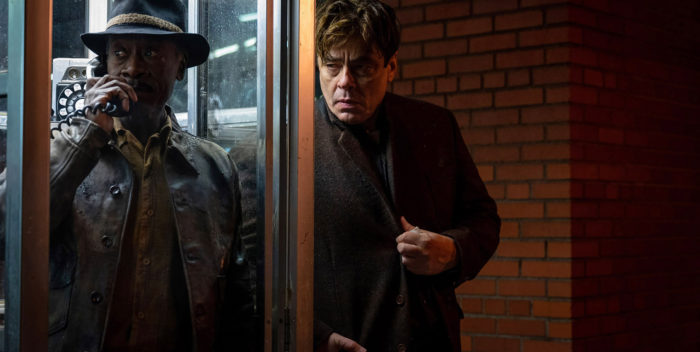 There are so many characters, plots, and stories in Steven Soderbergh’s “No Sudden Moves,” that I’m convinced he and screenwriter Ed Solomon thought we might get bored. It’s unlikely. I’m also thinking that he used a fish eye lens as a signal that something fishy is going on on this big beautiful screen. I’ll say.

“No Sudden Move” is like a Soderbergh greatest hits album, which is a pretty good thing. No one can be trusted or taken at face value in what feels like it’s going to be a heist movie but turns out to be a series of magic acts and sleight of hand as a kind of convoluted mystery unfolds among a group of what we would call “real characters,” as in those people are real characters.

The main thing to know is that it’s set in the stylized mid century 1955 past of Detroit, when cars ruled the world and were objects of pleasure. The automobiles in “No Sudden Move” are like showgirls, glistening, sexy, beckoning. Soderbergh has photographed them with such sensuality, Warner Bros. should make a calendar out of them. They are va-voom!

I’m not giving anything away to say that a group of criminals is set the task of obtaining a piece of paper in a safe. That’s all. The paper contains the design for the catalytic converter, which will change the automobile business. There’s a lot of money involved in exchange. But this gang is incapable of performing this task in a straightforward way, which results in a story that becomes a ball of twine. It’s a wonder we actually drive cars after seeing how this went down.

So Don Cheadle, Benicio del Toro, and Kieran Culkin (albeit briefly) seem to be doing this bidding for a whale of a man played by Benicio del Toro. At the same time, the cops are monitoring the action in the person of a deadpan Jon Hamm. Our gang decides to involve an auto exec and his suburban family, played to the hilt by David Harbour as a charming dolt, with Amy Seimetz as his wife, and Noah Jupe as his teenage son. There are plenty of other people, don’t worry, including Ray Liotta and a Surprise Uncredited Star.

SPOILER: It’s been written about, but the Surprise Uncredited Star can’t be ignored. His name is Matt Damon, and he does have more than just an extended cameo. He does for “No Sudden Move” what Lois Smith did in “Minority Report.” He arrives at the center to explain to the audience, and to Don Cheadle, what “No Sudden Move” is about. It’s about a bunch of people who have no business all coming together suddenly in confluence.  He has a big important speech, and if you listen to him, you’ll understand everything.

Finally, into this mix comes Bill Duke, grandly, dressed more for 1965 or 1975 than 1955, with his pimpy cane, sunglasses, hat and big coat like he’s ready to sing “Be Careful for What You Got” and he tries to steal the show from this bunch of scene stealers. I would say he does it, but at that point you may be exhausted.

If you took Soderbergh’s “The Knick,” “The Limey,” “Logan Lucky,” and “Out of Sight” and shook them into a fizzy cocktail with a slightly new taste, you’d get “No Sudden Move.” At a bar, that concoction would be a pleasant surprise. You’d say, “Oh that’s good!” and that’s exactly what you’ll say here. You may have to see it again (it’s playing on HBO Max July 1st) to get all the nuance, but just keep drinking. You’ll leave with a buzz.

Also PS Any movie that begins and ends with Don Cheadle, I’m in.