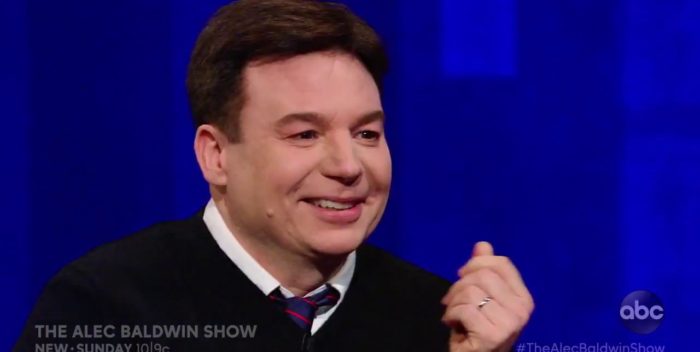 Mike Myers– I can’t help it, I have a soft spot for him. Not for Wayne’s World or Austin Powers, for the big headed Scottish kid blocking the TV in “So I Married an Axe Murderer.” That movie, just the idea of it makes me crack up.  Also, when he was married to his first wife, Robin Ruzan, Myers affectionately picked up a lot of Yiddish from his mother in law, Linda Richman, and used it very effectively on “SNL.” He made us all verklempt.

So Mike is shooting a new series for Netflix called “The Pentaverate.”  He’ll play seven  brand new characters in six half hour episodes. .

The plot: “What if a secret society of five men has been working to influence world events for the greater good since the Black Plague of 1347? As this new series begins, one unlikely Canadian journalist finds himself embroiled in a mission to uncover the truth and just possibly save the world himself. Remember, the Pentaverate must never be exposed!”

Is that really the plot? Who knows?!

When will we see it? When they’ve finished it, I guess. I’m certainly looking forward to it.