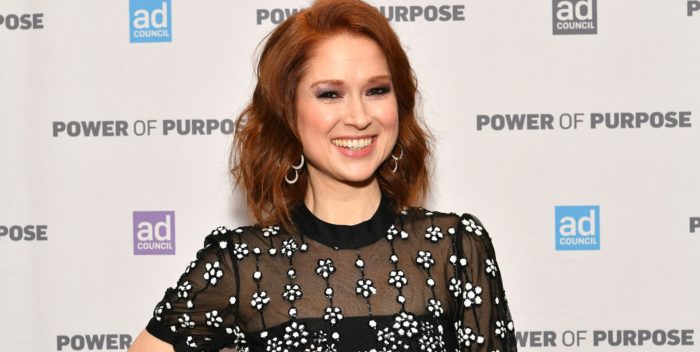 I’m aghast at the mass hysteria labeling actress Ellie Kemper a KKK prom queen. In 1999 she was made the Queen of the Ball at the Veiled Prophet Gala in St. Louis. Much has been made of Veiled Prophet’s century long history in St. Louis, accusing them of racism and associating them with the Klan.

I’ve got no stake in this discussion, I never heard of them. But I did read that Kemper’s family were Abolitionists. Her great grandfather, the patriarch of the family, was vehemently anti-slavery. So there’s that. But why muddle around in research and facts?

Then I checked the Form 990 tax filing for the Veiled Prophet Foundation. I even looked at their Facebook page where I found the video below. Veiled Prophet dispenses funds every year to needy groups. In 2018, they built the playground seen in the video below at Biome Stream School in St. Louis. They donated over $100,000 and their time, as you can see in the video. Biome is 91% minority as described on their website. I never heard of the KKK building playgrounds for Black kids, have you?

Veiled Prophet donates several thousand dollars a year to supplies for foster children, and various schools. I’ve confirmed that the Form 990 is correct, for what it’s worth. So this story is not literally black and white.

The Veiled Prophet may have been racist a long time ago, I don’t know. But when Ellie Kemper participated in the Ball, in 1999, it had already been 20 years since they accepted Black members. Now it’s 42 years. I’ve confirmed with their spokesman that they have Black members now, and they participate in the Veiled Prophet Ball. As you can see from the video below, it’s not really a “Secret Society.”

Last, it should be noted that Ellie’s dad, David Kemper, head of Commerce Bank, donated $2,000 to Joe Biden last year. In 2016 he donated to Hillary Clinton’s campaign. But he’s definitely a Republican at heart. In 2016 he also gave a whopping $50,000 to the Senate Majority PAC through the Veterans Foundation. But he didn’t give a penny to Donald Trump, and that counts for a lot.

A spokesman for Veiled Prophet says:

“The VP organization is dedicated to civic progress, economic contributions and charitable causes in St. Louis. Our organization believes in and promotes inclusion, diversity and equality for the entire region. We absolutely reject racism and have never associated with any organization that harbors these beliefs. We are proud of our commitment to support civic St. Louis for 143 years.”

Social media is the worst. It just unleashes anger for no reason, resentment of what amounts to nothing. The crazy thing is that this time is was against a perfect lovely, funny comedic actress who’s done nothing but entertain us. She committed no crime, no act of social injustice. We have people actively inciting and encouraging treason in this country, but the glare of hatred is on the the girl who played the receptionist on “The Office.” How very awful and bizarre.