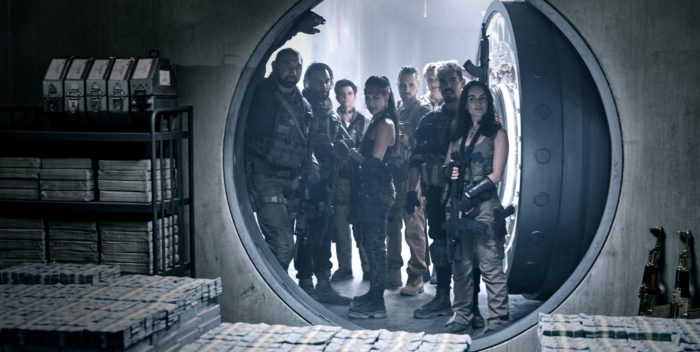 I just came back from seeing Zack Snyder’s terrific “Army of the Dead.” I’m not an expert on zombie films. This is one is a zombie-heist film. It runs almost two hours 20 minutes. The time flies by. Snyder’s pacing and characters are fun and fresh, the movie is funny (and a little violent). Think of “Ocean’s 8” with zombies. The cinematography — all done by Snyder– is award worthy. There’s a healthy dose of Wagner’s “Gotterdamerung” opera, too, which made me smile.

At the Paris Theater, where you must see “Army of the Dead” starting Friday– or wherever Netflix plays it because it deserves to be seen on a big screen, Snyder and his producer wife Deb, did a Q&A with TikTok influencer Grace Randolph after the press screening. We learned that the movie was too bawdy for Sheryl Crow. She wouldn’t let the Snyders use her song “Leaving Las Vegas” on the soundtrack, Big mistake, Sheryl. It would have been perfect.

The cast is top notch, loose as a goose and obviously enjoying themselves. It’s the opposite of Snyder’s DC Comic movies for Warner Bros which always feel constricted. Here the ebullience is organic. Even when zombies are trying to bite the non zombies and blood is spurting. Snyder treads a nice line between serious and camp.

The actors: Tig Notaro steals the show as a wise cracking helicopter pilot. Even the Snyders admitted to liking her character the best. But you will be impressed with everyone starting with Dave Bautista as the leader of a gang of would be thieves who are paid to break into the now-walled city of Las Vegas which has become infested with the walking dead. British actress Ella Purnell is sensational as his plucky daughter. I really liked Omari Hardwick as one of Bautista’s gang, and German actor/ director Matthias Schweighofer as Dieter, specialist safe cracker.

Schweighofer was such a hit that he immediately made a prequel to the film, which Netflix will release later this summer, about his character. It’s mostly in English but a little German and French. There’s also a Netflix animated series based on “Army of the Dead” coming this summer. Deb Snyder also told me they know exactly how they will make their sequel, even though I questioned how it might be done.

“Army of the Dead” follows Snyder’s 2004 “Dawn of the Dead,” which was inspired by George Romero’s classic 1978 film of the same name. But this could launch a whole new franchise for Netflix. The Snyders, who suffered a terrible personal loss in 2019, are in love with the execs there and happy to be done with DC/Warner Bros.

“Army of the Dead” starts Friday on Netflix and allegedly somewhere in theaters. If you can, see it there on the big  screen. You will need a big box of popcorn.