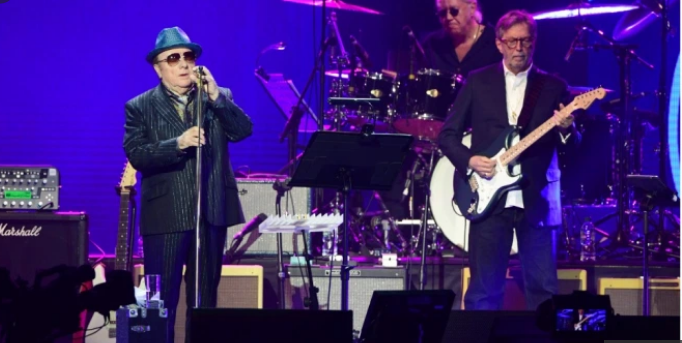 Eric Clapton is doubling down on his insane stance over the lockdown and the vaccine. He’s against them both and said so in a song written by companion nut case Van Morrison called “Stand and Deliver.”

As of Friday, since December,  few have been interested in what they have to say. “Stand and Deliver” has sold a total of 5,500 copies, half of which was from streaming.

Van’s album, available for a couple of weeks, called “Latest Record Project,” a double album, has sold a total 213 copies. Including streaming of singles, the number is 3,000. But that 213 is actual sales, which says a lot. (On top of that. Morrison is accused of anti-Semitism on the song “They Own the Media.”)

Eric, Van, no one wants to hear it. You’re wrecking what’s left of your careers.

In a letter to an Italian musician, which the music shared with Clapton’s permission, the famed guitarist said:

“I took the first jab of AZ and straight away had severe reactions which lasted ten days. I recovered eventually and was told it would be twelve weeks before the second one…

“About six weeks later I was offered and took the second AZ shot, but with a little more knowledge of the dangers. Needless to say the reactions were disastrous, my hands and feet were either frozen, numb or burning, and pretty much useless for two weeks, I feared I would never play again, (I suffer with peripheral neuropathy and should never have gone near the needle.) But the propaganda said the vaccine was safe for everyone…”

“I continue to tread the path of passive rebellion and try to tow the line in order to be able to actively love my family, but it’s hard to bite my tongue with what I now know,” Clapton wrote.

“Then I was directed to Van [Morrison]; that’s when I found my voice, and even though I was singing his words, they echoed in my heart,” Clapton wrote. “I recorded ‘Stand and Deliver’ in 2020, and was immediately regaled with contempt and scorn.”

So that’s how Clapton feels, and it would be dangerous if anyone was taking him seriously. They’re not.