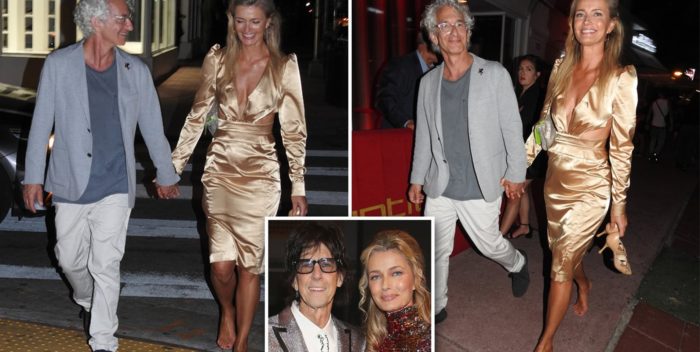 Paulina Porizkova, former model, recent Vogue cover girl, is living it up now that her husband, Ric Ocasek, is dead.

The leader and founder of the Cars died cutting Paulina out of his will. He wrote in that she had “abandoned” him.

Since then she’s been on a campaign to whitewash the story, paint herself as a victim in whose mouth butter wouldn’t melt. She’s suing the estate and dating screenwriter Aaron Sorkin.

She likes screenwriters. She dated one at least in 2019, if not sooner. His name is Ed Solomon, he wrote the “Bill and Ted” movies with Keanu Reeves and Alex Winter. He also wrote “Men in Black.” In the latter movie, Will Smith and Tommy Lee Jones have a little device that wipes out peoples’ memories. Hmmmm….

Solomon was evidently surprised this morning when a profile of Paulina appeared in the NY Times Style section in which he was excised from her story. Solomon wrote on Twitter: “Sure, *now* all my friends – now that we’ve broken up – are all coming out telling me what they wouldn’t say the whole time we were dating: my girlfriend was imaginary”

Well, she wasn’t. The Daily Mail, always reliable on these subjects, covered their unveiling as a couple exactly two years ago.

Estranged husband and new boyfriend shared more than just a girlfriend, too. Ric died on Ed’s birthday. There’s no end of weirdness there.

I’ve never understood how writers listening to Paulina’s story make sense of her timeline when Ocasek died. He was very ill, suffering from cancer and was post-op from heart surgery but she and her sons left him alone in his townhouse. There was no aide, no nurse, no family member. He was left overnight. In the morning, Porizkova says, she brought him coffee– what you do for a person in such health peril– and found him dead.

A month before Ric died in September 2019, Paulina was flirting with Solomon on Twitter. That was several months after their coming out party.

Maybe I’ve been watching too much late night Perry Mason, but I know Paul Drake would have some questions after hearing that story.

Yet the Times’s Katie Rosman paddled right along with it, as did Vogue and a lot of other people. Paulina tells this story of woe on her Instagram account daily.

Ocasek is painted as a bad guy because he omitted the two sons from his first marriage from his will. He had six sons, a pair from each of three marriages. Paulina has the youngest pair. They’re in the will. Who knows why Ocasek made those decisions, but he did.

As far as Rosman’s Times story, she didn’t really ask why Ocasek thought he was “abandoned.” The word just sits there, begging for an explanation.

Porizkova claimed to be homeless after Ocasek’s death. But the townhouse she owned with him sold for $10 million, half of which was hers. So “homeless” might be an exaggeration. The pictures of her new apartment look pretty swell, I’ll say that. It’s good to know $5 million can still get you something these days.

Porizkova is very talented. She wrote a novel. She was a good actress in the movie, “Anna,” from 25 years ago. It was the story of a beautiful girl from Czechoslovakia who couldn’t catch a break in New York. She was very convincing. And still is.

PS Here’s a picture of Paulina on the set of “Bill & Ted” summer 2019 a few months before Ric Ocasek died.