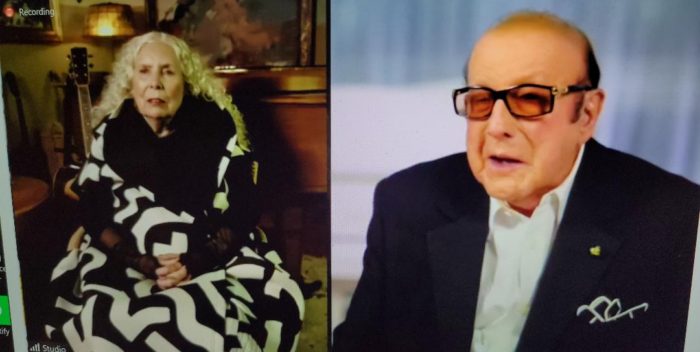 Joni Mitchell told Clive Davis tonight during his amazing Zoom gala for the Grammy Museum how she wrote her biggest hit, “Both Sides Now.”

First of all, this interview was a coup because Joni hasn’t given an interview since her brain aneurysm several years ago. I am happy to report that she looked resplendent, and spoke perfectly with no ill effects from her illness. She has made a remarkable comeback.

Joni told Clive that “Both Sides Now” came to her when she was on a plane, reading Saul Bellow’s “Henderson the Rain King.”

“In the book, he’s also on a plane and that inspired me to look out the window at the clouds. People made fun of me, how can you say you’ve looked at clouds from both sides. But I did.”

Joni has been hosting salons at her home, with guests like Herbie Hancock, Chaka Khan, Elton John, and Brandi Carlile, who performed a stunning version of “A Case of You” commissioned for this show. It’s the best thing she’s done, and she’s done a lot of great things.

Among other revelations, Joni told Clive that when she first started out she had to write her own songs because the folk community was “so territorial. They would say, I play that song in this territory.” So she started writing. She was told her early songs were no good because no one would cover them! But so many Joni Mitchell songs are in the pop canon sung by other stars, she certainly proved them wrong. Think of “River,” or “Big Yellow Taxi,” or dozens more. She got the last laugh.

There’s more, but I’m doing this real time. Come back later and refresh. (Now Clive, who just interviewed Paul Simon and Elton John and HER, is talking to Da Baby. Insanely wonderful.)