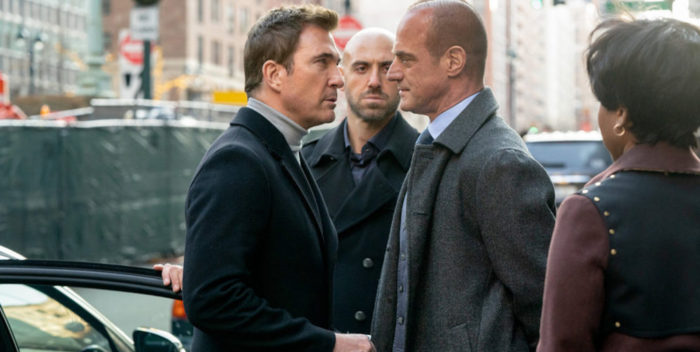 Benson and Stabler will get to go another round.

Hardcore fans will be thrilled as the saga of Mariska Hargitay’s Olivia Benson and Chris Meloni’s Elliot Stabler will continue in cross overs galore, no doubt, and more fevered proclamations of love.

But “Organized Crime” has soft ratings. It’s really very much like “The Colbys” or “The Girl from UNCLE.” It’s not generating new fans or ideas. It’s completely dependent on “SVU.”

“OG” also suffers from structural issues. Instead of putting Stabler in situations with all kinds of organized crime, he’s just got Dylan McDermott to fight every single week. Even on “The Fugitive,” David Janssen had different adventures. He wasn’t always battling Lt. Gerard or the one armed man.

Dick Wolf says next season will be broken into three 8 episode arcs. I really hope the plotting fans out to just more of Stabler vs. (lol) Sinatra. Maybe they’ll have a Sinatra singalong.