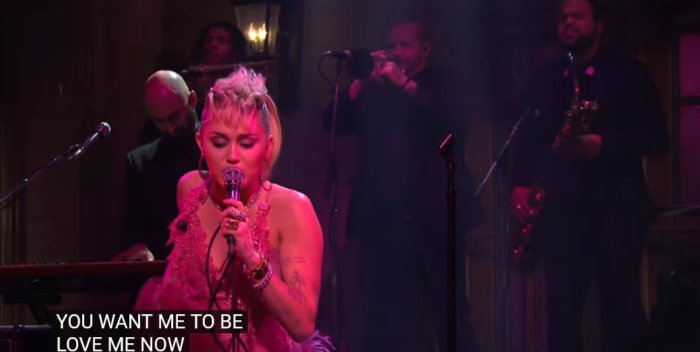 Miley Cyrus appeared not to remember the lyrics to her song, “Plastic Hearts,” last night when she performed it live on “SNL.”

During the song, her third of the night, she repeatedly looked down at the TelePrompter to find the lyrics. The song is only a year old, it’s not like an oldie she might have forgotten. Oh well. It was that unmemorable. “Plastic Hearts” sounds like about 40 different songs, with a very recognizable Motown backbeat.

Miley’s other big number was singing as a duet partner to a young guy named Kid Laroi on his hit, “Without You.”

The former song didn’t sell one copy on iTunes based on the performance, and “Without You” remained where it was in the top 10.

Don’t get me wrong: I like Miley, and her voice is great. But this was a throwaway appearance. And they must have chosen “Plastic Hearts” at the last minute. She did look great, though. If this were the 70s or 80s, Miley would be hosting an hour long variety show every week with Kenan Thompson as her featured player.

Coming this Saturday is Olivia Rodrigo with her novelty hit, “Driver’s License.”