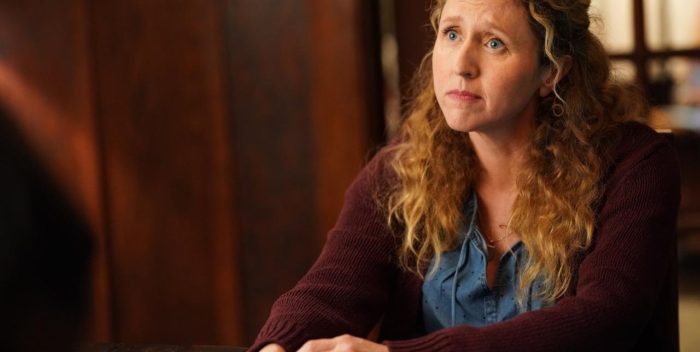 I am totally down with this.

Brooke Smith was so good on “Big Sky” this season, she’s starting her do-it-yourself Emmy campaign.

You know Brooke from “Greys Anatomy” and “Silence of the Lambs,” among dozens of credits. She was a standout on “Big Sky” as Merilee Legarski, wife of the murderous psycho crazy sheriff played by John Carroll Lloyd.

As the daughter of PR guru Lois Smith, I understand the importance of campaigning for awards. I can’t afford a publicist, but I did pay the fees and submit myself for consideration to be nominated for an Emmy for Best Supporting Actress in a Drama Series for my work as Merrilee Legarski on David Kelley’s “Big Sky.” Because of the “stay in your lane” mentality of Studios, they won’t include me in any FYC panel discussions or press, or even put my name in the cast list on the Big Sky FYC page because I was a “recurring character” and not a “series regular”. I appeared in 8 out of 10 episodes (more than some of the other actors who were “series regulars”) and I was paid a lot less than everyone else, but I made peace with that because of the incredible material David E. Kelley was writing for me. I told myself that as long as I had great stuff to do on Big Sky playing Merrilee Legarski, I would survive being alone + away from my family in Vancouver for 6 months during a global pandemic.
Even though I know about publicity and what it does, I have always believed that if you do good work, people will notice. It’s difficult to compete when FYC ads in trade magazines start at about 10k, and most actors have teams helping them to get the word out. But I am very proud of my work on this show, so I am trying to do a DIY campaign myself. I am emailing tv critics and trade magazines directly to ask them to vote for me if they liked my work on the show. What have I got to lose? “
OK Emmy voters. Best Supporting Actress Drama. Why can’t a great actress on a network show get nominated? Let’s start here !