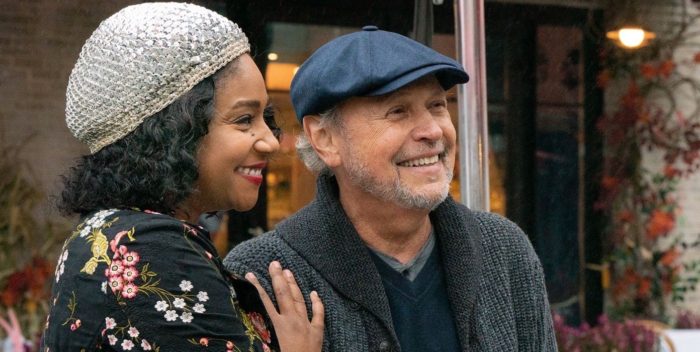 Here today, gone tomorrow. That’s the theme of “Here Today,” starring and directed by our beloved Billy Crystal and co-written with the “SNL” genius Alan Zweibel. It’s a throwback movie with a lot of shmaltz and many parts to recommend it starting with Billy’s lovely performance and astonishingly real and poignant Tiffany Haddish.

Indeed, Tiffany — whose talents are still  being discovered — sings, she plays a singer who’s very Macy Gray like and excellent. She also reassuringly sings Bob Dylan’s “You’re Gonna Make Me Lonesome When You Go” over the credits.

What happens here are a lot of things. Billy’s character, Charlie, has onset dementia. He and Haddish’s Emma meet cute, and become fast friends. It’s kind of clear that her fondness for him will turn not into a romance, but she will become his caregiver down the line. Don’t worry, the movie ends before we get into anything grim.

Zweibel and Crystal have set the movie in a familiar venue, an “SNL” type show on a Comedy Channel type channel. So there’s a cast, producers, and sketches. Some of them work, some don’t and it doesn’t matter. We’re in a warm, familiar setting as a backdrop to Charlie’s slow deterioration.

Charlie is not only an Alan Zweibel type character at this fake “SNL” but he also has some movies and books under his belt. One of them starred Kevin Kline and Sharon Stone, directed by Barry Levinson, all of whom make welcome cameos in “Here Today.” So does Yitzhak Perlman, playing the violin. Zweibel also makes a cameo.

A lot of this you could have expected. Laura Benanti and Penn Badgley play Charlie’s kids, and they don’t get his relationship with Emma. Benanti also has a daughter getting Bat Mitvahed, played by the very engaging Asian American actress Audrey Hseih. They never explain that she’s adopted, which is a nice touch. She just ‘is,’ and she reads from the Torah capably.

There’s an audience that will kvell over “Here Today,” particularly in the much tighter first and second acts. The third act takes on water like the Titanic, I wish they’d thought it through more. And I wish we’d known a little more about Emma. The screenplay simply avoids developing her beyond Charlie’s world. But that might have brought in other issues. Luckily, Haddish just plays it and you go with her.

Look, Billy Crystal and Alan Zweibel are heroes to my generation, our Mel Brooks and Carl Reiner. I’m happy to spend time with whatever they do, and “Here Today” is a left field gift.