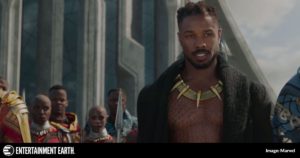 Disney-Marvel announced a schedule of new movies today but the most important one is “Black Panther 2.”

It is now known as “Wakanda Forever” but will not open with Vice President Kamala Harris emerging from a Cincinnati coffee shop sipping a Wakanda Forever blend — although that would be a great scene.

Did they drop a clue about “Wakanda Forever” in the sizzle reel below? At :43 the narration over TChalla and Erik Killmonger says “That man next to you, he’s your brother.” Hold on! Are the two foes brothers in some way? Will Killmonger be revived from death?

Ryan Coogler’s sequel to his billion dollar franchise will come on July 8, 2022, which isn’t too far from now. So we can assume Coogler and co. have a script and know how they will address the death of Chadwick Boseman aka T’Challa aka the Black Panther.

Since the Black Panther can only be blood related, fans are guessing that Shuri, his sister, played by Letitia Wright, will assume the mantle.

But it’s likely that Michael B. Jordan will somehow be repurposed into the screenplay as the hero even after his Erik Killmonger was killed in the first movie. Jordan is now too big a star and too identified with “Black Panther” not to be in the movie. Killmonger will somehow rise from his ashes in the sea. My guess is he’ll marry Shuri, surely. And don’t call me Shirley!

Jordan said in an interview last week that he’s “unlikely” to be in “Wakanda Forever” but wouldn’t rule it out. “Never say never,” he said. He didn’t want to be attached to an out and out lie, obviously. The actor’s next big job is directing “Creed III,” but that seems like it would film after “Wakanda Forever,” which would have to be made this summer and fall in order to make July 8, 2022.

But what if that is a clue in the sizzle reel? Jordan is somehow playing T’Challa’s brother? Then he might be the new Black Panther.

All the rest of the “BP” cast will be back, as well, including Angela Bassett, Danira Gurai, Winston Duke, and new Oscar winner Daniel Kaluuya.

It’s amazing to think that Jordan’s career trajectory has just soared and soared. He was on “All My Children” in 2003, “Friday Night Lights” in 2009, and then starred in Coogler’s sensational and moving “Fruitvale Station” in 2013. The director and star formed a bond that lead to “BP” and superstardom. A thrilling story!