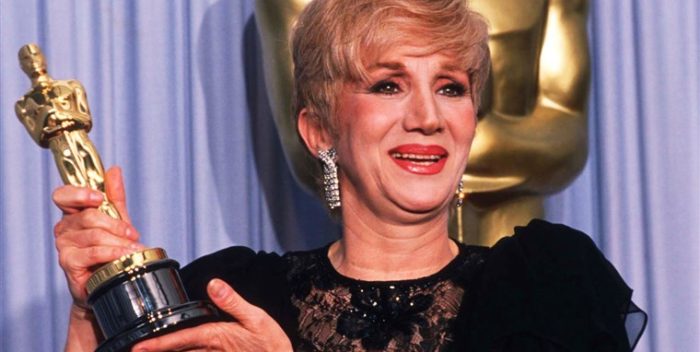 Sad news that the great Olympia Dukasis, a beloved actress who won an Oscar in 1987 for “Moonstruck,” has died. She was 89 and left indelible mark from that movie and many others including “Steel Magnolias.”

Dukakis, a cousin of Massachusetts Governor Mike Dukakis, a former presidential candidate, had a long marriage to another great theater and TV actor, Louis Zorich. She referred to her 1988 win as “the year of the Dukakii” because it was also the year Massachusetts Gov. Michael Dukakis, her cousin, was the Democratic Party’s presidential nominee. At the ceremony, she held her Oscar high over her head and called out: “OK, Michael, let’s go!”

She appeared in five Broadway productions and was nominated for a Drama Desk Award. She was also nominated for three prime time Emmy Awards.

Dukakis died in New York City, where she was considered a quintessential “New York actor.”

She was also well known and admired for her work as the character Anna Madrigal in the TV series, “Tales of the City.”

She didn’t work much until the early 1980s, when she took work on the soap “Search for Tomorrow.” But it was in 1987 when she played Cher’s mother in “Moonstruck,” that Dukakis exploded as an overnight sensation. She was 45 years old. After that, she never stopped working.

What a great lady and fine actress. She will be missed.