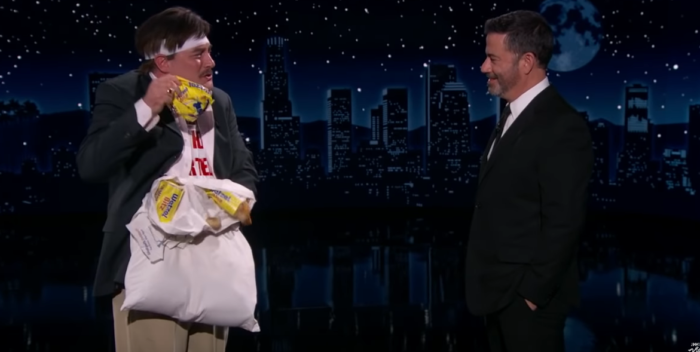 But first, Kimmel lampooned Lindell with a comic sketch for four minutes with an impersonator. Later the impersonator came out and joked with the real Lindell, who didn’t get that he was being sent up the whole time. Kimmel asked him if he’d been vaccinated, Lindell reponded “no,” Kimmel said: “for rabies?”

And ABC ran a commercial for MyPillow, the first I’ve seen on a network since January when Lindell endorsed and encouraged the the January 6th insurrection. His products were dropped by just about every retailer.

But ABC took Lindell’s money and ran a commercial for MyPillow’s Giza sheets before Lindell’s interview.

Kimmel came off like Tom Snyder interviewing a nut. ABC came off very badly. On top of that, actor Justin Theroux appeared in a segment before Lindell, in which the MyPillow CEO was further mocked.

It’s hard to know whether to feel repulsed by Lindell or feel sorry for him. He seems out of it, not with it. Detached from reality. But he’s committed to his cause whatever it is.