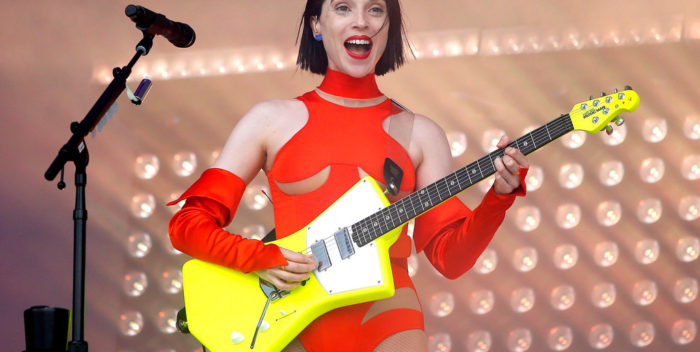 Until a singer called St Vincent appeared on “Saturday Night Live” recently, I’d never thought about her or written about her. Maybe it was generational. But when I looked her up  I was surprised to learn she’d been around for about 14 years and never had a hit. Hits are usually the requirement of being a pop star as opposed to a bar act.

Then she turned up on Paul McCartney’s “McCartney III Imagined,” so I thought, oh, well, maybe better think about her.

But now today St, Vincent– whose real name is Annie Clark — has found herself in a little contretemps. She gave an interview to a UK writer named Emma Madden, who Tweeted out today that the piece had been killed at Clark’s request. Madden wrote an explanation that was then deleted along with the St. Vincent piece, which she had also posted.

Who the hell is St. Vincent? I don’t know. Her name sounds like a hospital. But I don’t like it when a celebrity or interview subject gets a piece killed. That happened to me once. Barbara Walters killed an interview I did with her at Vogue because she thought I asked too many intrusive questions. (This from Barbara Walters!) Anna Wintour caved faster than you could say, well, Anna Wintour.

So what’s the story with St. Vincent? Her father spent time in jail for a white collar crime. It’s part of the story of her latest album, so Madden asked her about it. Afterward, Clark freaked and told her PR people to kill the story. Madden says her editor told her Clark was “terrified” of the story coming out. Terrified? I’ve looked over the transcript. There’s nothing terrifying about it that I can see.

But as I learned with Vogue, editors rarely stand up to celebrity publicists. They need them for the next profile. Madden says she next heard from someone at Clark’s PR team (she has a PR team– I’d never heard of this woman until recently)– who told her the interview had been “too aggressive.” Uh huh. I’m trying to imagine Madden holding a gun to Clark’s head. But that’s what I thought when Barbara Walters withdrew from my story. I said, “I didn’t force her to let me interview her.”

The thing is, nowadays, celebrities would rather use social media to make announcements and control their stories. There was a time when you could really do research and ask interesting questions about background. motivation. etc. Now the star would rather just make their own statements on social media and not be questioned. Sounds like that’s what Clark had in mind.

Clark is 38, lives in New York, according to Wikipedia she had a two year relationship with professional celebrity relationshipist Cara Delevingne. Also thanks to Wikipedia, David Byrne once said of her in an interview: “Despite having toured with her for almost a year, I don’t think I know her much better, at least not on a personal level… mystery is not a bad thing for a beautiful, talented young woman (or man) to embrace. And she does it without seeming to be standoffish or distant.”

As for Madden, whom I do not know, my sympathies. I read your interview, you asked fine questions. There was nothing aggressive about your tone. But this may be why, after 14 years, no one really knows who St. Vincent is. (Apparently during her last publicity tour, she made interviewers crawl into a pink box; she would play a pre-recorded message on a tape recorder if a question bored or irked her. And they complied! I say, that’s when you walk out.)

There are some people, perhaps the more sanctimonious and morally pure, who might not be interested in an artist’s reflection on their father’s white collar crimes. Do you have much sympathy for those kinds of people?

I mean I think I can get sympathy for all people. If that is the reason why they decide not to spend 46 minutes with my work then I’m sure there’s plenty of other work out there for them that they can enjoy that is morally pure. They should find pure work from pure people and enjoy it.