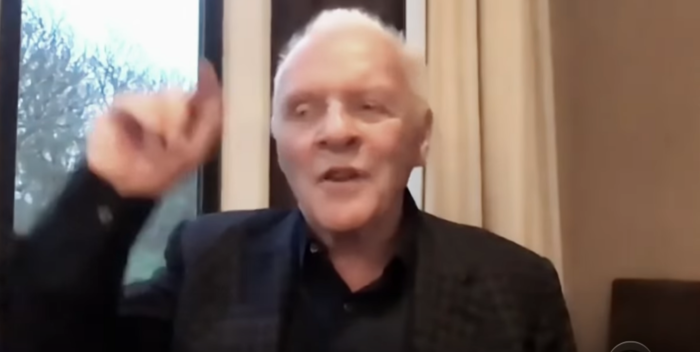 Well, after I said Sir Anthony Hopkins wasn’t really promoting “The Father,” there he was last night on Stephen Colbert with writer- director Florian Zeller.

The clip is below, and toward the end you’ll see Sir Tony do his sweet imitation of Katharine Hepburn giving him advice on his first film, “The Lion in Winter.”

Yes, Hopkins seems to be in Wales still, which means he won’t be at the Oscars. Maybe he will appear somehow magically. He’s in great spirits with Colbert and Zeller. Colbert is overcome, and says he thinks Hopkins gives the greatest performance of all time in “The Father.” It’s a little hyperbolic, but he’s right. Hopkins is amazing in the part.

Could Hopkins pull off a surprise win on Sunday night’s Oscars? It’s possible. He deserves it. But Chadwick Boseman’s death is pulling heavily on voters. It’s too bad there can’t be a tie.